Kontonis stressed that the extradition ban handed down for the eight by the Greek Supreme Court is absolute. He underlined that the high court did not review the facts of the case, but only whether the officers would have a fair trial in Turkey. 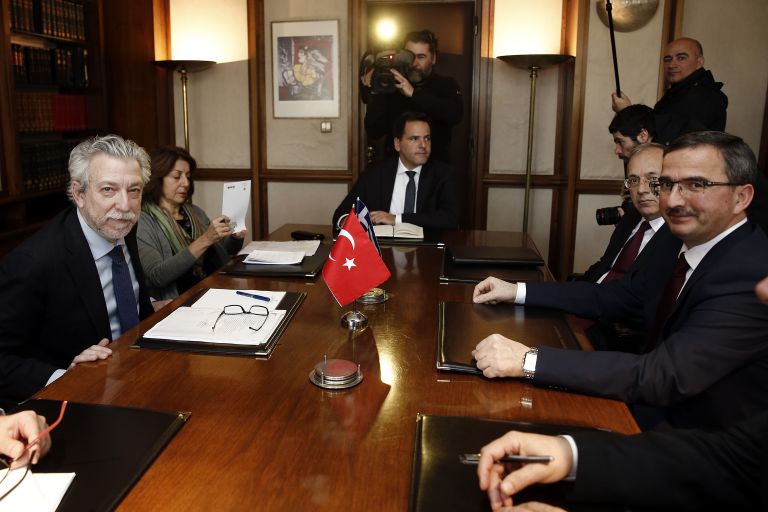 Turkey’s Deputy Justice Minister Bilal Uçar and officials from his ministry met with Justice Minister Stavros Kontonis today in Athens, amidst persistent Turkish demands for the extradition of eight Turkish military officers accused by Ankara as coup plotters, and on the heels of threats by Turkish officials over the matter.

The eight fled to Greece by helicopter right after the abortive coup against Turkish President Recep Tayyip Erdogan, on July 15, 2016, and the Greek Supreme Court has delivered an irrevocable ruling that the officers cannot be extradited to Turkey, as they cannot be afforded a fair trial.

“Of course the issue of the Turkish officers was raised,” Kontonis told journalists, returning to his offer that the eight can be tried in Greece if Ankara decides to submit a request to that effect.

Uçar and his delegation had earlier met with Greek justice ministry officials.

At the meeting Kontonis reiterated his offer to put the eight officers on trial in Greece.

But many believe such an eventuality could well become a dangerous boomerang, if the officers use their defense to put the Erdogan regime and its Islamicist authoritarianism on trial, and if the Greek judiciary is forced into a position to review the allegations and facts regarding the Gulen movement in Turkey and its alleged involvement in the abortive coup.

“It is up to the Turkish authorities to decide. The possibility is clearly stated in the Greek Penal Code,” Kontonis said.

What the Greek penal code says

That entails Ankara filing a lawsuit in Greece, which would have to characterise the military officers as terrorists (according to the requirements of Article 8 of the Greek penal code), which would then be reviewed by a Greek prosecutor, who would in turn file charges in Athens.

Flying to Turkey for more talks

Kontonis accepted an invitation to visit Turkey in the near future, but he did not indicate the purpose of such a visit after today’s exhaustive talks, or whether it is linked to continuing extradition demands.

Kontonis stressed that the extradition ban handed down for the eight by the Greek Supreme Court is absolute. He underlined that the high court did not review the facts of the case, but only whether the officers would have a fair trial in Turkey.

When one of the eight was granted asylum, the Turkish foreign ministry unleashed threats against Greece. «Greece, who granted asylum to one of the eight coup plotters who participated in the July 15 coup bid, has once again revealed through this decision that it is a country that protects and embraces plotters,» it said in a 30 December statement.

The Greek government then instructed the Aliens Bureau to remand the officer and is currently challenging the decision to offer him asylum in the courts, in an apparent effort to placate Ankara.

Ankara accuses the officers of membership in the FETO organisation of Fethullah Gulen, the Islamic cleric who was a close ally of Erdogan, but now an arch-enemy accused of being behind the coup.

‘You may not have a country if officers released’

“Greece is not aware that every FETÖ member they release is a big threat to their country. The terrorists you release today are like dynamites ready to explode, and you may not have a country to protect when they do,” Turkish Deputy Prime Minister Hakan Çavuşoğlu said at the end of December in a tweet from his official account,” as Hurriyet English reported at the time.