Steve Forbes: “Greece can teach the world a needed lesson” 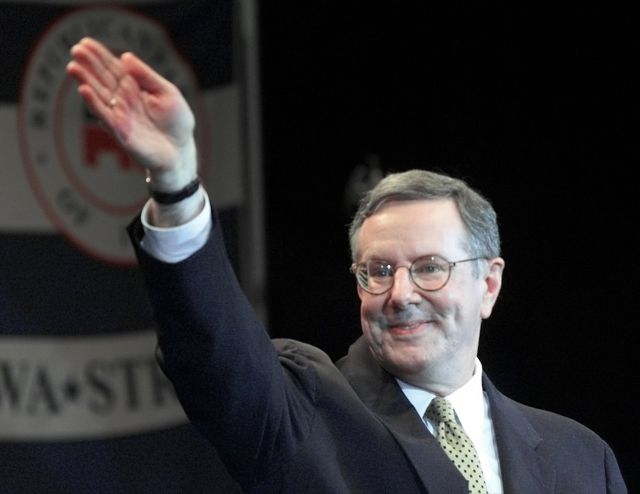 American businessman Steve Forbes has published an open letter to the Prime Minister of Greece Alexis Tsipras and the Minister of Finances Yanis Varoufakis, where he explains the actions that the Greek government make take in order for the economy to return to growth. The letter was initially published in the 23 March 2015 issue of Forbes.

The letter in full, as it was published online

You may have won a four-month reprieve of sorts from your creditors, but your situation is desperate, and everyone knows it, most particularly Europe’s paymasters, the Germans. As you just painfully learned, your ability to blackmail your creditors is a fraction of what it once was. Businesses, banks and others have had plenty of time to prepare for the worst-case scenario: Greece’s exit from the euro zone. Your own citizens have no faith in you, as evidenced by the massive cash withdrawals from Greek banks and the exodus of capital from Greece to supposedly safer havens.

You do have something of a case in your objection to raising Greece’s already horrific 23% VAT (a form of national sales tax). And you are right when you say the present program isn’t working. But your ideas–higher taxes on the “rich,” more government bureaucrats, virtually no privatization, higher minimum wages–are worse.

If you’re serious about saving your country and rescuing its people from a more dreadful economic catastrophe, there are basic steps you should take that would promptly promote economic growth, while giving you the priceless political opportunity to tell the troika–the IMF, the ECB and the EU (i.e., the Germans)–where to get off.

After all, there’s no reason that Greece’s economy can’t expand. Look at neighboring Bulgaria, Albania and, yes, Macedonia. They have troubles aplenty, but their performances are sterling next to yours. Their economies have expanded in recent years, while yours has experienced a terrible contraction. Must Greece perpetually be the runt of the EU litter when it comes to economic growth? No.

Here’s how you can put away your beggar’s cup for good.

– Taxes. Bulgaria and Macedonia each have a flat-tax system of 10% on personal incomes. Adopt your own 10% flat tax. Then go one better and slash your corporate tax rate to 10%. While you’re at it, whack your VAT to 15%, which will demonstrate your commitment to the downtrodden. As for your ridiculously high payroll tax of 45%, knock it down to 10% as well.

Of course, the troika and everyone else will scream that you can’t afford to do this. Your answer is that you can’t afford not to. Tax evasion in Greece is endemic. Your hideous tax system is one reason that Greece has a large informal economy. To annoy the Germans, cite the example of Russia. When Putin took over in 2000, Russia’s tax system was even more convoluted and corruption-ridden than that of Greece. Putin swept it all away, instituting a 13% flat tax on personal incomes and slashing other tax rates. Revenues soared immediately because of the ease of enforcement and greater economic growth. (Alas, that was the peak of the Russian president-for-life’s statesmanship.)

Taxes are a price and a burden. When you raise the price of such good things as productive work, success and risk-taking, the burden becomes heavier and the less you’ll get of these things.

– Privatization. Here’s an easy source of considerable cash that would enormously lighten the pressure on your budget. Prior governments have dragged their feet and have even been unwilling to complete a census of what the government actually owns and how many people work for these entities. This is irresponsible in the extreme. And your government has drastically scaled back what its predecessors were reluctantly going to do.

In 2011 I attended a conference in Athens, the purpose of which was to discuss Greece’s economic future. Among those attending were officials from Poland who had conducted numerous sales of government assets and companies, which totaled in the billions of euros. With exasperation these officials noted that George Papandreou’s government wouldn’t even meet with them to discuss the lessons Poland had learned about the right way to privatize. Your creditors can rightfully claim that continuing to bail you out when you refuse to vigorously pursue such an obvious course of reform is ridiculous.

– Stop trashing former Greek residents or those of Greek descent who want to help out by investing in Greece. The government should welcome such investors with open arms, not suspicion. Also, you should urge your own citizens not to regard them as unwelcome interlopers. In a book I coauthored with Elizabeth Ames, Money: How the Destruction of the Dollar Threatens the Global Economy–and What We Can Do About It, we recount this anecdote:

“When entrepreneur Demetri Politopoulos returned to his native Greece from the U.S. to start a brewery, his products were vandalized, his tires were slashed, and he received taunts and threats”.

– Make the process of setting up a business in Greece easy. Greece has made some progress in enabling people to set up legal enterprises, but the process still takes too long and offers opportunities for bureaucrats to demand that palms be greased. Use New Zealand as your model: It takes only a few keystrokes online to apply to open a new business there.

Along the same vein, and crucial to a properly functioning economy, is the enforcement of contracts. In this category the World Bank ranks Greece as one of the worst countries in the world.

– Change labor laws that kill job creation. Suffocating laws that ostensibly preserve jobs by making it expensive and difficult to fire employees end up making businesses reluctant to hire or, just as likely, encouraging businesses to hire workers off the books. Some progress had been made on this issue, which you, perversely, want to undo. Unions will howl, but a collapsed economy with soaring unemployment isn’t a pleasant prospect.

– Don’t even think of abandoning the euro. Your drachmas wouldn’t, as the cliche goes, be worth the paper they’re printed on. Greeks would shun them, which would leave the euro (and the dollar) as the de facto currency. Such a move would wreck what’s left of Greece’s banking system, and the economy would crater, making recent hard times look like paradise.

And, for goodness’ sake, don’t pull a Cyprus and confiscate bank deposits. As for capital controls, if you carry out the above true growth reforms, capital will pour into your depressed economy.

Alas, it’s not likely that you’ll undertake these economy-saving–indeed, economy-boosting–measures, especially the tax changes. Neither you nor your creditors seem to understand what enables an economy to prosper. You’re not alone–the confusion is global. When the U.S. elects a new President in two years, this will change, but it’ll be too late to spare Greece more unnecessary suffering.

Please prove us skeptics wrong by resolutely putting your country on the road to becoming the Hong Kong/Singapore/Switzerland of the Mediterranean.

Success would be your best revenge.