The honest compromise of Mr. Tsipras

The Prime Minister Alexis Tsipras experienced the negotiations of the past few days, especially those on Friday, as a “struggle for… 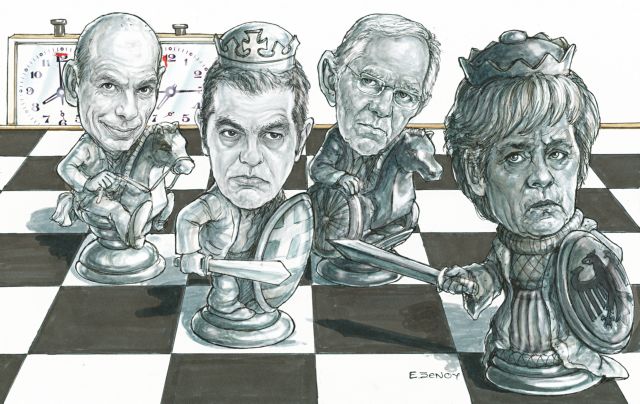 The Prime Minister Alexis Tsipras experienced the negotiations of the past few days, especially those on Friday, as a “struggle for survival”. He confessed to his partners that “it was hard” but ultimately thanks to the alliances he established, he achieved a agreement, an “honest compromise” are he calls its.

A breath for Greece

“We got four months – we asked for six – and now our head is over the water, we can govern” he reported, as he described how he experienced the tension of the past few days.

The relief was profound for the government. Most, especially those who invested in a falling out, could not believe that there was room for an agreement. More so when they knew that the German Finance Minister exerted intense pressure on his counterparts.

However “what happened at the Eurogroup on Friday was the isolation of Wolfgang Schauble”, according to government sources in Athens which were aware of the conditions under which the negotiations were carried out. The same sources underline that “this was the first time this happened, it was a historic moment”.

The truth is that the German Finance Minister, bearing in mind what had happened in the previous Eurogroup where Mr. Varoufakis was faced against 18 of his counterparts, exerted the sort of pressure that would neutralize the Greek side’s negotiation abilities.

He was lead by his ideological obsessions, perhaps even by bitterness from the dispute he felt in his home when he met with his Greek counterpart in Berlin.

In Athens they believe that Schauble was planning to eliminate or rather neutralize and immobilize the new, left-wing government in Greece.

By the end though he was only allied with the Spanish and the Portuguese, who ultimately also abandoned him.

In order to achieve the historic isolation of Mr. Schauble a loot of behind-the-scenes consultations with European leaders were needed. The Prime Minister personally contacted the French President Francois Holland three times, who according to sources, promised to help.

He is believed to have told Mr. Tsipras that “I will not leave you along in this negotiation”. In some respect Mr. Hollande ultimately succeeded in isolating Mr. Schauble and by extension Chancellor Angela Merkel. The French have their own reasons, they have been oppressed by the Germans in the past few years and perhaps they pursued Germany’s strategic defeat and at present it seems that Greece offered such an opportunity.

Furthermore, the ties of the French and Americans are very strong and Washington’s influence on Paris is intense. As everyone knows, the Obama administration pressured European governments towards finding a solution to the Greek problem.

In any case, Mr. Tsipras considers Friday’s Eurogroup session historic, not just for Greece, but for Europe. “It is the first time that German is not getting its way” he is said to tell his partners, insisting that the agreement has major significance for the whole of Europe.

The Prime Minister though is not deluded. He repeats that “we simply got our head above the water” and notes that “from here on we have a great uphill path to follow”. He does not hide the fact that “the situation is dire” that “the insurance funds are empty” and that “the banks have been immobilized in an artificial climate of uncertainty and insecurity”.

On Friday night he told his partners that “the situation remains critical” but he hoped that after the agreement “the climate would change the markets” and would help the government act in a more stable environment. He did not his concern that the government may have to face the same difficulties in June,but he estimates that in the meantime he will have the opportunity to establish himself in the domestic front and push the country’s affairs forward.

Furthermore, Mr. Tsipras believe that in the meantime he will be able to take advantage of the cooperation with European and international financial organizations and create a relationship of trust with them, capable of offering opportunities and flexibility in exercising and developing policies.

Additionally, he wholeheartedly believes that he will have the opportunity to take advantage of the country’s geopolitical position – according to Mr. Tsipras this is what saved us in the current situation –, to further develop the ties with the USA, China, France and the other European countries that allied themselves with him in the current crisis. The Prime Minister is treating the Eurogroup agreement as the launching pad for a new balance in Europe, which will pave the way for Pan-European initiatives, which will benefit the country.

As for the domestic front and the criticism that he has received or will receive from his party regarding the agreement, he does not believe that they create or will create a serious problem, at least not for now. He believes that the predictions of inter-party clashes and conflicts are excessive, he considers the concerns logical, especially from those who investing in a fallout. What Mr. Tsipras certainly achieved though, as he says himself, was to get his head above the water and seize the opportunity to govern, to demonstrate if he has the qualities and strength that is necessary to get the country and the Greek people out of the long-term and painful crisis.