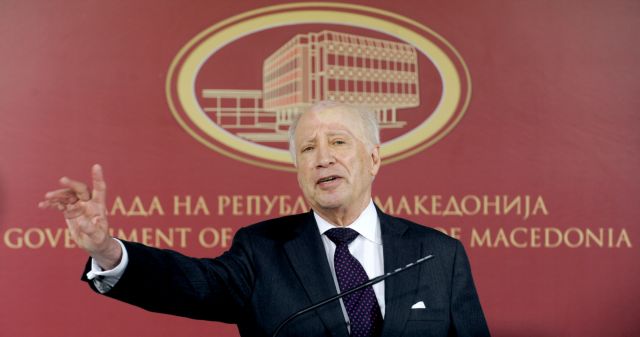 The United Nations’ special representative and mediator in the FYROM naming dispute Matthew Nimetz will be in Athens on Wednesday and Thursday, following a two-day visit in Skopje.

The American diplomat is scheduled to meet with the Minister of Foreign Affairs Evangelos Venizelos on Wednesday. Mr. Nimetz commented from Skopje that many countries, including the USA and Germany, have shown interest in finding a solution to the naming dispute, as it is important in ensuring stability in the greater region.

Mr. Nimetz also reported that he has many ideas regarding the naming dispute, which are currently being examined by the Greek and FYROM governments and pointed out that the time is right to resume negotiations between the two neighboring countries. When asked to comment whether the Greek Prime Minister Samaras‘ comment that “there is no Macedonian language” hinders discussions, Mr. Nimetz responded that he does not comment individual statements.