Detained Golden Dawn MPs to testify on 18th of March 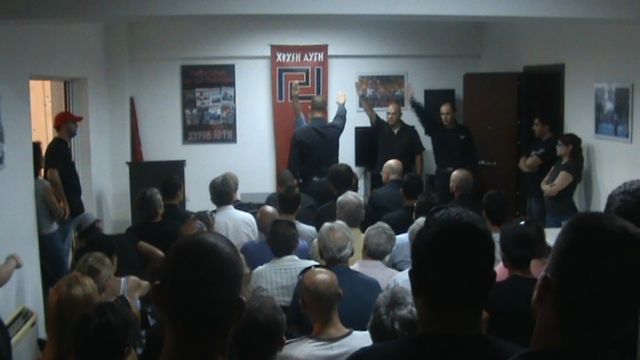 The six Golden Dawn MPs detained on felony charges are scheduled to testify before the Ethics Committee of Parliament on the 18th of March at the female wing of the Korydallos prison facility, where most of them are currently being held.

To that end the Committee president Christos Markogiannakis has requested from the Ministry of Justice to make all necessary arrangements so that the 10 MPs on the Committee can visit the prison facilities and quiz the detained Golden Dawn MPs regarding their participation and direction of a criminal organization.

MPs Nikos Michaloliakos, Yannis Lagos, Giorgos Germenis, Nikos Michos, Christos Pappas and Stathis Boukouras (who will be transferred from the prisons in Nafplio, where he is being detained) have all been detained on the criminal organization charges.

The prosecution has requested the lift on the parliamentary immunity of further Golden Dawn MPs in order to examine charges of aggravated weapon possession and intent to supply a criminal organization. The Parliamentary Assembly will decide on the matter on the 18th of March as well.

So far MPs Zaroulia, Kasidiaris, Arvanitis and Kouzilos have stated their plea before the relevant parliamentary committee last week. This week MPs Alexopoulos (who recently left Golden Dawn), Gregos, Zisimopoulos, Mattheopoulos, Barbarousis and Koukoutsis are scheduled to respond to the charges of participating and directing a criminal organization.