Two indicted for the 2010 «Marfin» and «Ianos» arson attacks 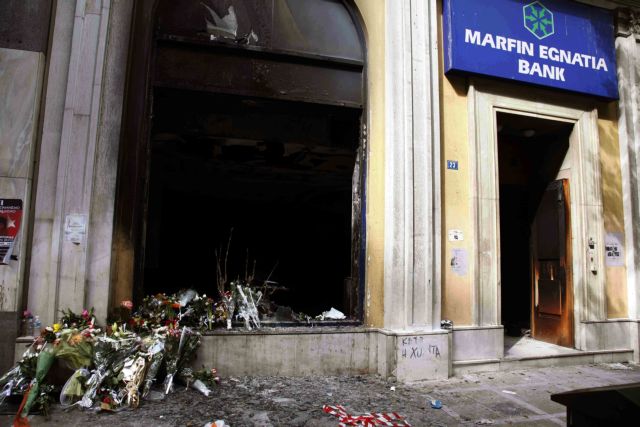 According to a report in the Real News newspaper the Council of the Misdemeanors Court of Athens has indicted two individuals for the arson attack against the Marfin bank branch on Stadiou Street during mass protests in May 2010 and another attack against the nearby “Ianos” bookstore.

The suspect is thought to have thrown Molotov cocktail bombs inside the bank after two unknown accomplices smashed the front window and doused the entrance with flammable fluid. Three employees were trapped inside the bank during the attacks, Paraskevi Zoulia, Epaminondas Tsakalis and Angeliki Papathanasopoulou (who was pregnant) and lost their lives.

At the time of the attack against the bank there were 24 employees inside, which lead the court council to estimate that the suspects’ goal was to kill all of them. The indicted suspects will be charged with murder, attempted murder and a number of charges related to explosives and property damages.

The courts held that the defendants had not taken any precautions or established any evacuation plans in the event of an arson attack. Additionally the defendants did not attempt to evacuate the building despite being unprotected and all other banks in the area not operating on the day.