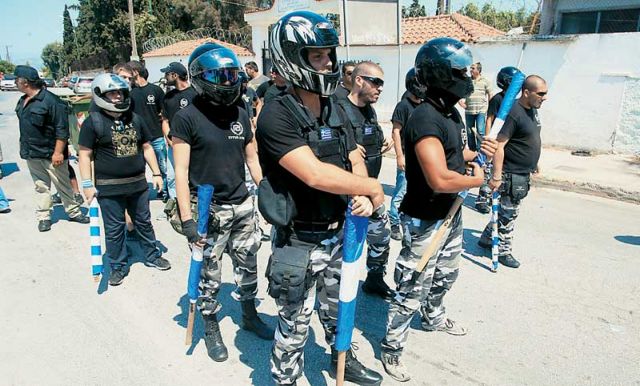 Some of the candid conversations were recorded in the aftermath of Pavlos Fyssas’ murder by Giorgos Roupakias, with members discussing how to contain the “damage” and expressing their worries about the legal proceedings. Chillingly, the transcripts reveal that in many cases Golden Dawn’s “strike teams” colluded with the police during riots, operating with virtual impunity against protesters.

The general secretary of Golden Dawn’s Nikea chapter Giorgos Patelis expressed his worry about the developments after Roupakias murdered Fyssas in Amfiali and was concerned that he would be expelled from the party and be forced to fend for himself. In another conversation can be heard whimpering and claiming to be depressed, with the other caller urging him not to “crack”.

In one conversation with Giorgos Roupakias, the murderer blames his wife for her “damning” testimony and actions following the murder of Fyssas and in another he worries about ending up in the Malandrino Correctional Facility where hardened Albanian criminal Alket Rizai is held.

The Golden Dawn members also discussed the bundle of 32 Golden Dawn-related case files that the Minister of Public Order handed over to the Supreme Court for consideration. According to the callers, the 32 cases involved the same group of Golden Dawn supporters.

In another conversation Roupakias’ family members accuse Golden Dawn MP Ilias Kasidiaris of turning his back on the people he trained to become murderers, urging Giorgos Roupakias to “spill the beans” regardless of the consequences.

According to another recorded conversation, the revelations by former Golden Dawn members in the aftermath of Fyssas’ death caused concern amongst Golden Dawn members, with MP Yannis Lagos determined to purge the party from whistleblowers. In the same conversation one caller refers to their involvement in extorting businesses on Sygrou Avenue.

In one conversation the man charged with the security of Golden Dawn in Piraeus urged Yannis Lagos to not appear in court, while expressing his indignation for “getting away” with a series of brutal attacks “only to be locked away two years later”. The head of security boasted that the murder in Keratsini would greatly boost Golden Dawn’s polls to a 40% approval rate.