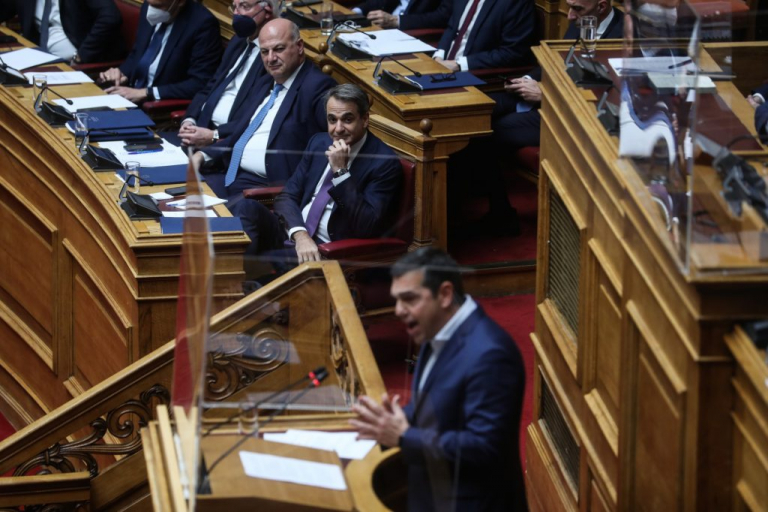 Mitsotakis underlined that shortly before Tsipras left office in July, 2019, his government in the amended criminal code made illegal surveillance, which was a felony, a misdemeanour.

Prime Minister Kyriakos Mitsotakis and main opposition SYRIZA leader Alexis Tsipras traded charges about the surveillance of  a party leader, and allegedly of ministers and even the head of the Hellenic Armed Forces, by the National Intelligence Service (EYP) during a parliamentary debate on a law that the government says makes the preconditions for surveillance stricter.

Tsipras persistently demanded at the end of his oration that Mitsotakis answer whether – as a recent press report indicated – the Chairman of the Joint Chiefs of Staff, Konstantinos Floros, and Labour Minister Kostis Hatzidakis were under surveillance.

The PM, having repeatedly asserted that he is never informed of surveillance operations by EYP, left the chamber immediately after Tsipras’ pressured him and before other opposition party leaders spoke.

Tsipras and the head of centre-left PASOK’s parliamentary group focused on the government’s longstanding denials that it had anything to do with illegal Predator spyware and the fact that it was belied by a New York Times report stating that the Greek foreign ministry in November, 2021 issued two licenses for Predator to be exported by the Intellexa comoany to Madagascar and that the company also sought a license to export the spyware to Ukraine.

Mitsotakis underlined that shortly before Tsipras left office in July, 2019, his government in the amended criminal code made illegal surveillance, which was a felony, a misdemeanour.

He claimed that tens of thousands of surveillance permits were issued while SYRIZA was in power.