The authors of the magazine present in detail the same number of regions of the country in the Aegean islands, the Ionian Islands, Northern Greece, Central Greece and the Peloponnese 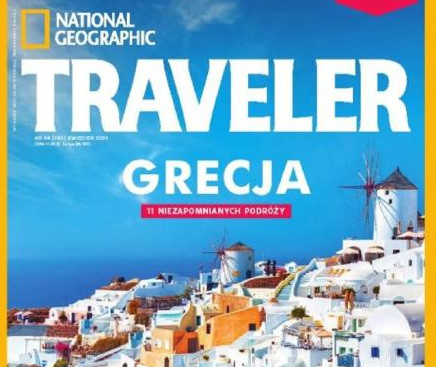 The last issue of the bi-monthly magazine “National Geographic Traveler” of Poland features a large dedication of 200 pages exclusively on Greece, having on the cover a spectacular photo from the caldera of Santorini. In recent years, Greece has consistently been among the top destinations for Polish tourists, while it is characteristic that in 2021 Poland emerged as the fourth largest inbound tourism market for our country.

In the tribute with the central title “25 locations in Greece”, which was implemented in the context of the general cooperation of the magazine with the the Hellenic Tourism Organization – EOT’s Poland bureau, the editors of the magazine present in detail an equal number of regions in the Aegean islands, Ionian Islands, Northern Greece, Central Greece and the Peloponnese. Their choices include destinations that are either already popular with Polish travelers (such as Crete, Rhodes, Corfu, Zakynthos, Santorini, Athens and Thessaloniki) or are gradually gaining popularity in the Polish market (Alonissos, Kefalonia, Hydra, Aegina or the lesser known, among Poles, regions of Epirus and Macedonia).

The authors praise the heritage of Greek culture, history, monuments, the unique climate of the country, the beauty of nature and the feeling of hospitality of the inhabitants, while special references are made to both Greek cuisine and the night entertainment offered by Greece. As the editor-in-chief Agnieszka Frenus emphatically notes in the editorial of the issue, “the simple pleasures for which I feel so happy with this country, make me look forward to my next trip to Greece”.

Press trip of Polish journalists in Athens and Thessaloniki

Besides, the EOT bureau of Poland, organized in April a press trip for two journalists of the same magazine in Athens and Thessaloniki, for the promotion of the city break tourism in the framework of the specialized campaign “greekend *”.

During their stay in Greece, the two Polish journalists visited the most emblematic monuments and sights of the two cities, were guided to the most representative museums and places of culture, toured their seafronts, made a day cruise to the Argosaronic Islands, and got to know the special flavors of Greek gastronomy.

The relevant reportage is expected to be published in the June issue of the magazine and in May in its online edition.