Greek PM to meet US President on Monday

The two officials are expected to discuss a wide range of issues, such as the strategic Greece-US partnership and the Russian invasion of Ukraine 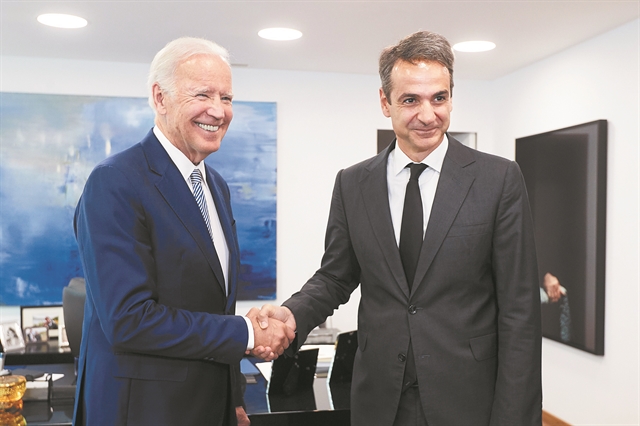 The Greek Prime Minister, Kyriakos Mitsotakis, and the United States President, Joe Biden, are expected to discuss a wide range of issues including the strategic Greece-US partnership and the Russian invasion of Ukraine when they meet in Washington on Monday, government sources said on Sunday.

President Biden and his spouse will host a reception following their meeting at the White House for Mitsotakis and his spouse that will celebrate the 200th anniversary of the Greek War of Independence.

Prior to his meeting with the US president, Mitsotakis will chat with Washington Post journalist, David Ignatius, at Georgetown University.

On Tuesday, Mitsotakis is scheduled to meet the US president at the White House, before addressing Congress in a joint session, following an invitation by House Speaker Nancy Pelosi. He is also expected to meet with members of Congress who have supported issues of Greek interest.

Before returning to Greece, the PM will also attend a dinner hosted by 11 organizations of the Greek diaspora.

This will be Mitsotakis’ second visit to the White House after assuming his duties. During the first one, in January 2020, he met with the former president, Donald Trump.