How should a Marshall Plan for Ukraine work?

Ukraine has an opportunity to leapfrog a generation of technologies – to green its energy system, modernise its transportation and communications infrastructure. 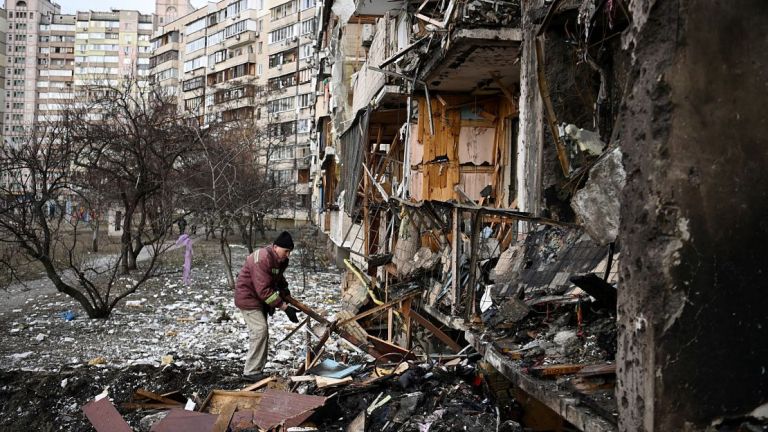 Talking up a Marshall Plan for Ukraine is a popular sport nowadays. The game starts by tossing out a div for the cost of reconstructing Ukraine from the ravages of the Russian invasion – $250bn or $500bn or $1tn, depending on assumptions about how much is destroyed, the cost of caring for refugees, and so forth. The overall cost of the post-war Marshall plan is then compared with US GDP in 1948, when the program started. This typically leads to the conclusion that the cost of Ukrainian reconstruction relative to the size of the donor countries will be in the same ballpark as the Marshall plan.

These kinds of comparisons are not, in fact, the best use of Marshall Plan history. It is impossible to put a number on the cost of reconstruction as long as there remains uncertainty about the duration of the war and how much territory will be controlled by Ukraine’s legitimate government. Just because the US was prepared to provide post-war Europe with nearly 5% of its 1948 GDP, spread over four years, tells us nothing about whether this is the right level of support for Ukraine.

Other aspects of this history are more relevant to Ukraine’s situation. It is revealing, for example, that Marshall Plan disbursals began even while there was still some fighting in Europe. Although the Greek civil war continued through the summer of 1949, Greece received Marshall Plan aid in 1948. In fact, Greece received $300m already in 1947 under the auspices of the American Mission for Aid to Greece, whose structure provided the template for the Marshall plan.

Similarly, aid to Ukraine can start now, though it should be used with discretion. Repairing bridges that are simply destroyed again by Russia would serve no purpose.

It is also important to recall that Marshall Plan funds were more than 90% grants and just 10% loans. Today there are calls for the western powers to guarantee new Ukrainian government bonds. This would bring the government’s borrowing costs down to single digits and provide funds for reconstruction. But it would leave Ukraine even more heavily indebted, when it already faces the challenge of restructuring its legacy debt. Guarantees for additional Ukrainian borrowing would merely be a way for western governments to cheap out on reconstruction aid.

Moreover, the US created an independent agency to administer the Marshall Plan. Freed from the bureaucracies of the US State and Treasury Departments, the Economic Cooperation Administration (ECA) could ramp up quickly. It was able to tap private-sector expertise, starting with its head, Paul Hoffman, the president of Studebaker. It avoided entanglements with the UN, where the Soviet Union’s membership would have caused problems.

Aid for Ukraine should similarly be administered by an autonomous agency accountable to donor governments. While it can consult and, ideally, coordinate with the International Monetary Fund and the World Bank, it should preserve its independence, given Russian membership in both organisations.

The Marshall Plan’s architects recognised the need for ownership on the part of aid recipients, while proceeding on the basis of “trust but verify.” European governments submitted detailed plans for spending down US funds. These were the bases for painstaking negotiations with the ECA before moneys were disbursed. In countries like Greece, where there were concerns about corruption, the ECA had hundreds of agents embedded in the relevant ministries. Administrative reforms were a focus and precondition for Marshall plan aid.

Ukrainians will be understandably sensitive about foreign interference in their reconstruction. But foreign oversight is the price of foreign aid, particularly on the scale that Ukraine will require. The government in Kyiv can provide reassurance by enhancing the transparency of its spending, for example by expanding its online public procurement portal ProZorro.

The Marshall Plan prioritised rebuilding export capacity. It recognised the invigorating effects of international competition and the political benefits of European integration. Ukraine almost certainly faces a long road to the nirvana of EU membership. But the journey can be expedited if western aid is structured to align Ukrainian institutions and policies with those of the EU.

Finally, the Marshall Plan allowed Europe to leapfrog a generation technologically. Europe was decades behind the US in adopting the “high-speed throughput” manufacturing methods on which the golden age of post-war economic growth was based. Rather than simply reconstructing European industry along pre-war lines, an effort was made to transfer state-of-the-art American manufacturing technology. European officials, plant managers and trade unionists traveled to the US as part of Marshall plan-funded productivity missions to learn about these techniques and returned with new knowledge, yielding tangible benefits for productivity growth.

Ukraine now similarly has an opportunity to leapfrog a generation of technologies – to green its energy system, modernise its transportation and communications infrastructure and update urban planning. These are first and foremost tasks for the Ukrainians. But the west can and should help.

*Barry Eichengreen is professor of economics at the University of California, Berkeley, and a former senior policy adviser at the IMF.