Supermarkets: What products will go on a quota – Anxiety about prices

Due to fears of shortages, supermarket buying has increased in recent days – What consumers and professionals are shopping 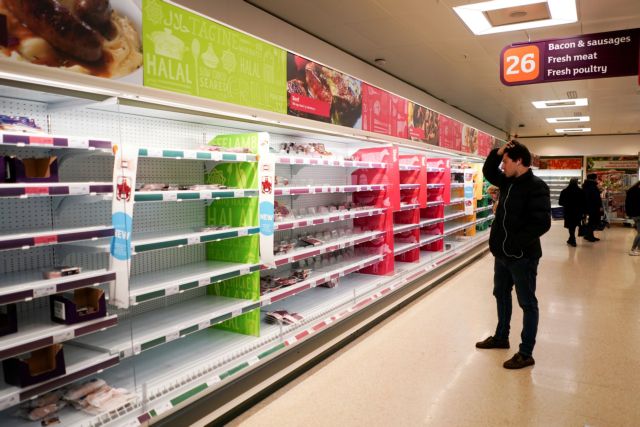 Shortages of raw materials, mainly flour and sunflower oil, have begun to become visible in the Greek market due to the war in Ukraine that continues for a third week.

The problem now lies not only in the lack of imports from Ukraine or Russia, which banned grain and sugar exports, but also in the “alternative” supply channels, as markets such as Austria, Hungary, Bulgaria, the Netherlands, Serbia, Portugal etc. are reducing exports of raw materials, prioritizing their own needs.

The result is that the first panic buys have begun in the domestic market, reminiscent of the scenes that unfolded in the days of the first lockdown, two years ago. In the last few days, there has been an increase in sales of basic foodstuffs in supermarkets. Due to the war, consumers are storing,  flour, pasta, seed oils, rice, legumes, sugar, etc. However, the phenomenon has not yet taken on great proportions, while at the moment the shelves have not been completely emptied.

At the same time, however, some chains of organized retail, but also cash & carry stores have begun to put a ceiling on the amount of sunflower oil and flour they give to businesses and individuals for fear of shortages. Flour manufacturers have also carefully planned their inventory management in order to avoid supply problems in the market, while they recommend calm to consumers in the face of panic and intense stocking purchases.

It should be noted that a ceiling for sunflower oil has entered a supermarket in Spain (Mercadona, the largest supermarket chain in Spain, but also Consum and Makro reported that they placed a quota of up to 5 liters per consumer), while some chains in Italy and Germany already impose restrictions on the market for certain foods.

According to Fediol, the Association of Vegetable Oil Industries, the available sunflower oil stocks in the European Union are estimated to last for 4 to 6 weeks, as warned on March 4, 2022. It is recalled that Ukraine meets 82% of the EU needs for sunflower oil. In terms of the domestic market, at least 50% of seed oil consumption comes from Ukraine.

Prices are being pushed upwards

Although, in fact, commodity price hikes have not yet hit the shelves due to the effects of the war in Ukraine, something we will see in the coming weeks, if a conflict lasts beyond March, the fear of shortages triggers a new wave of accuracy.

Regarding oils, the price of sunflower oil has skyrocketed (a 10 liter package of sunflower oil, which used to cost 15 euros before the war in Ukraine, today has reached 25-26 euros, say the representatives of the restaurant industry), followed by kernel oil and in recent days, this growing trend is passing on to olive oil.

At the same time the prices of flour and pasta increase by small increments week to week. According to information, bulk flour imported from Bulgaria increased by 15% after the war in Ukraine. It should be noted that pasta has preceded with increases of 6% in December 2021 and additional increases of 8% in February this year, while 9% was the increase made by flour manufacturers in branded products in previous months.