Responding to criticism from main opposition leader Alexis Tsipras that the government did not send parliamentary approval to send arms, Mitsotakis underlined that ethnic Greek in Eastern Ukraine have been killed in the Russian attack. 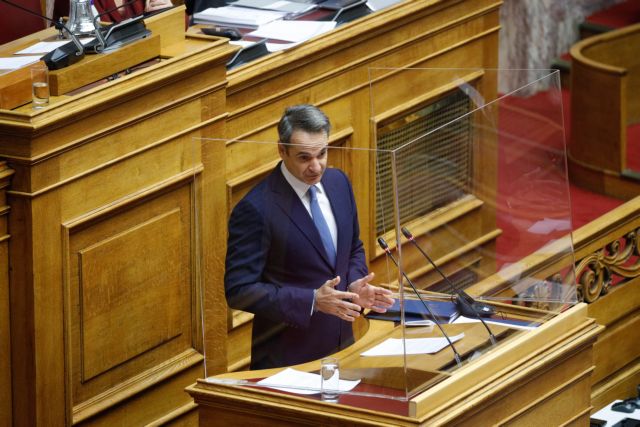 Prime Minister Kyriakos Mitsotakis defended his decision to send arms to Ukraine and slammed the Russian evasion, underlining the devastating impact of Western sanctions on Moscow.
“Russia’s open, ongoing invasion of Ukraine reawakens on our continent the old nightmares of war and spheres of influence,” he noted, underlining that Moscow is at once attempting to mutilate both Ukraine and international law.

Responding to criticism from main opposition leader Alexis Tsipras that the government did not seek parliamentary approval to send arms, Mitsotakis underlined that ethnic Greek in Eastern Ukraine have been killed in the Russian attack.

“[Russia] with the use of force is disputing the territorial integrity of a neighbouring country.”

The PM said that the invasion is leading hundreds of thousands of Ukrainians to leave their country as refugees.

“With the pretext of a non-existent threat, Putin is attempting to abolish the freedom of another country, with a violent return to the era of hegemonic rule.”

Mitsotakis said that Greece is still dealing with the open wound of Cyprus [which Ankara invaded and occupied in 1974 under the false pretext of protecting the Turkish minority], and he underlined that in Ukraine one is either with or against peace.”

The PM said that sanctions decided by the EU will have a huge impact on the Russian economy, and that, “Every international ostracism brings a domestic re-thinking. This is the intangible power of democracy in dealing with the violence of authoritarian regimes.”

With the backdrop of hundreds of thousands of Ukrainian refugees, who are abandoning many cities to escape the horrors of the invsion, Mitsotakis said that Greece is ready to take in war refugees.