Florina – Immediate support to those affected by the earthquake 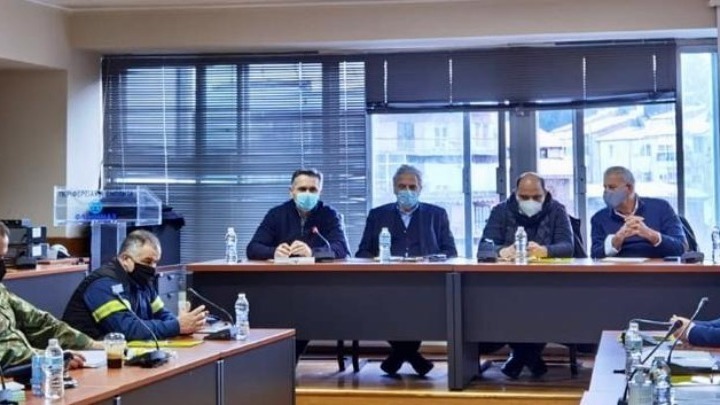 The Minister of Climate Crisis and Civil Protection Christos Stylianidis, the Deputy Minister to the Prime Minister with a responsibility for state aid and restoration of natural disasters and the restoration of natural disasters and Transport Christos Triantopoulos and deputy minister for infrastructure and transport Michalis Papadopoulos toured buildings and houses in Florina that have been hit by the recent earthquake of January 9.

The ministerial staff spoke with Dimitris Vassou, owner of a neoclassical house located in the city center and which has suffered significant damage to the masonry.

Then they visited the city’s 6th Primary School, one of the old building complexes that has also suffered damage to the masonry. Mr. Stylianidis was informed by the engineers of the Technical Works Department of the Florina Prefecture about the extent of the damage and the time needed for restoration, while he discussed with Mayor Vassilis Giannakis the alternative of distance learning for students while restoration work is carried out.

Mr. Stylianidis with Triantopoulos and Michalis Papadopoulos toured the Cultural Center of Florina, which houses the Conservatory and the screening room named after Theodoros Angelopoulos and saw the damage to the 2nd floor of the building.

Deputy minister Michalis Papadopoulos stressed that “until today, the teams of the Ministry of Infrastructure that carry out inspections have carried out spot checks on 300 houses and 1,000 apartments within the city.”

Shortly before entering the closed meeting in the hall of Florina prefecture with the participation of the governor George Kasapidis, the three mayors of Florina, representatives of the army and the fire brigade, Mr. Stylianidis stated that “the order we received from the prime minister is to conduct a check to see where the state can show its essential help to close the wounds of the earthquake.”

Mr. Stylianidis stated that “the immediate goal is to repair the damage quickly”, estimating that “the damage is not extensive and we will repair it quickly”, while he made a special reference to the schools saying that “we want the students to return to their lessons as soon as possible.”

Mr. Triantopoulos explained that when the check process is completed by the committees of the Ministry of Infrastructure, then “the support for the victims will be activated regarding the assistance in household goods”, while with the completion of the secondary controls by the steps of the Ministry of Infrastructure “Housing assistance can also be activated for the victims whose homes have been damaged.”

Mr. Triantopoulos made a special reference to enterprises, saying that “for the part of the damages in buildings the aid will be included in the housing assistance of the Ministry of Infrastructure, while for the damage to businesses” due to the phenomenon there will be cooperation with the Region of Western Macedonia.”

The mayor of Florina, Vassilis Giannakis, stated that the municipality received direct financial support of 150,000 euros from the Deputy Minister of Interior, Stelios Petsas, but stated that “we will ask for additional financial support from the government not only for the restoration works of municipal buildings, but also money for assistance to our citizens.” The deputy governor of Florina, Sotirios Vosdou, explained to the ministerial staff that “the damage to the buildings in the city, but also in the villages, is significant, but it is not large” and expressed the optimism that “they can be repaired in a reasonable time”.