‘It is perfectly clear that the government has not taken the necessary decisions to support the public health system as much as he it should have based on the current pandemic conditions, and that should be done,’ the centre-lefty party leader declared. 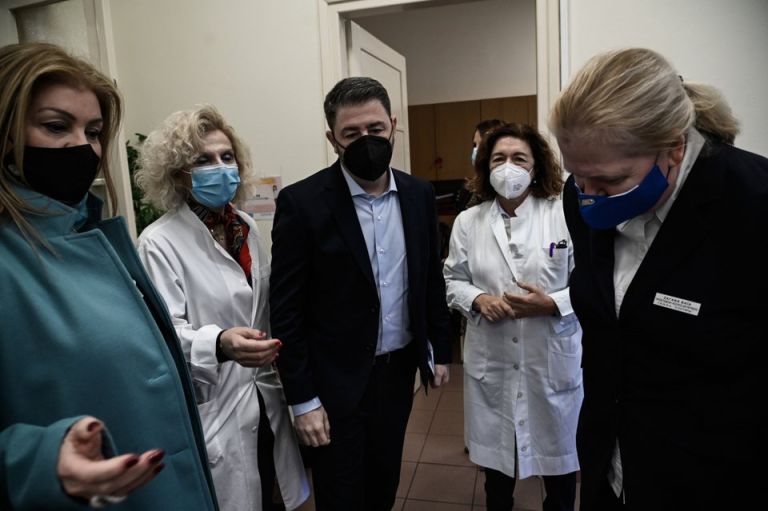 Movement for Change (KINAL) party leader Nikos Androulakis called today for mass vaccination and stronger backing for the NHS, even as he lambasted the government’s management of the pandemic, while on a visit to Athens’ Sotiria Pulmonary Diseases Hospital, one of the main COVID-19 reference hospitals in Athens.

He stressed that there were 17 intubated patients in the hospital, of whom only one was vaccinated.

The centre-left party’s leader was highly critical of the government and PM Kyriakos Mitsotakis.

“Mr Mitsotakis cannot hide his enormous responsibilities behind the extreme and condemnable statements of members of the opposition,” Androulakis said, alluding to former SYRIZA MP Panagiotis Kouroumblis’ calling New Democracy MPs “murderers” due to the fact that a scientific paper concluded that many fewer patients would have died had the NHS been bolstered and if there were fewer disparities between the quality of healthcare in large urban hospitals and provincial hospitals.

The Greek healthcare system has grappled with enormous problems diachronically – particularly after deep budget cuts during the decade-long economic crisis – and by most accounts is in need of a radical overhaul with increased funding.

Androulakis also announced that his party will launch a vaccination information campaign in order to “break the fear and disinformation surrounding the vaccine”.

“From the briefing we had here at Sotiria Hospital, the data are revealing, as are the ECDC’s data. I beg every Greek citizen who has not utilised our only weapon, given to us by science, to be vaccinated,” Androulakis declared.

“Todat at Sotiria hospital we have 17 untubated patients and only one is vaccinated. In Portugal, 15 people die [of COVID-19] every day but in Greece nearly 100 a day, because they have a very high vaccination rate. It is very important for us to improve our vaccine rollout to save human lives.”

“It is perfectly clear that the government has not taken the necessary decisions to support the public health system as much as he it should have based on the current pandemic conditions, and that should be done. Mr. Mitsotakis cannot hide his enormous responsibilities behind extreme and condemnable statements of members of the opposition,” Androulakis said.

“We, as a responsible party, and we are launching an information campaign to dispel fear and disinformation regarding vaccines. More people in our country must undertake an initiative to support these people and make them understand that defending human life is a daily battle,” he added.

“It is inconceivable that we can accept as normal to lose [the equivalent of the population of] a Greek village every day. We must do more, with consensus, prudence, and planning. This is chiefly the job of the government, but it is also the responsibility of all of us who truly want to turn a page and to have the best possible handling of the pandemic in our country.”