Anti-vaxxer ‘Guardians of the Constitution’ handcuff school principal, abduct him, take him to police 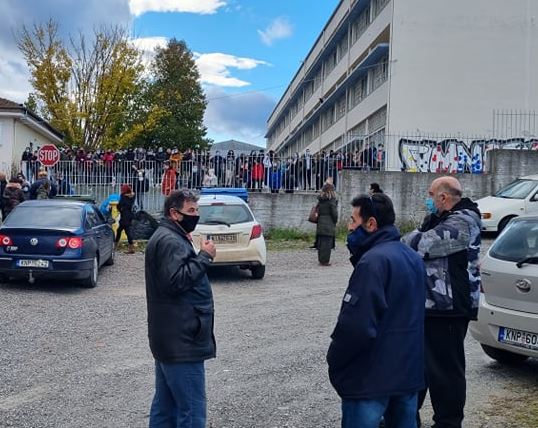 Police initially remanded in custody ten people who came to the precinct to hand over the principal, and are examining the extent of each one’s responsibility for the unprecedented incident.

Five individuals have been arrested in connection with an incident in Aiginio, Piera, where a junior high school principal was handcuffed by members of the vigilante, anti-vax, self-styled ‘Guardians of the Constitution’, placed in a car, and driven to a police precinct.

Citizen’s Protection Minister Takis Theodorikakos declared that, “Such behaviour is provocative and unacceptable and police should not allow it to be repeated.”

The principal was attacked at 8am as he was arriving at the school. A few individuals handcuffed him, abducted him, forcing him to enter an automobile, and drove him to the Pydna-Kolindrou police precinct.

They told police that the principal is “violating the Constitution”.

Police initially remanded in custody ten people who came to the precinct to hand over the principal, and are examining the extent of each one’s responsibility for the unprecedented incident.

The principal was taken to the Aiginio health clinic for first aid as he had abrasions from the handcuffs.

Over the last few days the same group reportedly created incidents outside the school and authorities had been informed.

The mayor of Pydna-Kolindrou, Anastasios Manolas described the incident as ‘absolute irrantionality.

Speaking to ERT public television, he expressed his sorrow over the negative publicity drawn by the incident.

“The self-styled “Guardians of the Constitution” “arrested” the junior high school principal and drove him away in an unknown direction (they ended up at the police precinct). One can only imagine the psychological state of this person and how he may have felt in those moments,” Manolas said.