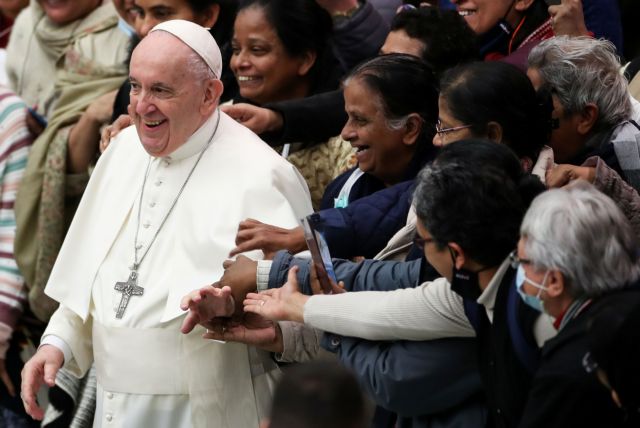 Pope Francis arrived in Cyprus today, the first stop on a five day journey that will bring him this week to Athens and the island of Lesbos, where he visited with refugees and migrants in April, 2016, and brought some of them back to Italy, which he will again do in Cyprus on this trip.

The plight of refugees and migrants has been high on the agenda throughout his papacy and the tour comes at a moment that refugees and migrants are being widely instrumentalised as a geopolitical tool, most recently at the Belarus-Poland border but earlier by Turkey at the Greek-Turkish border region of Evros in the winter of 2020.

Bemoaning the division of Cyprus

“I have come as a pilgrim to a country geographically small, but historically great, to an island that down the centuries has not isolated peoples but brought them together, to a land whose borders are the sea, to a place that is the eastern gate of Europe and the western gate of the Middle East,” the pope said.

The pope referred to Ankara’s 47-year occupation of Cyprus, without naming Turkey, as “greatest wound suffered by this land has been the terrible laceration it has endured in recent decades”.

The key word is ‘dialogue’

Pope Francis noted the pain of the tens of thousands of Cypriots who have become refugees in their own land and said he will pray for peace on the island.

The pope said he is mindful of the suffering of people unable to return to their homes and their places of worship and said he would pray for peace in Cyprus.

“The way of peace, which reconciles conflicts and regenerates the beauty of fraternity, has a single word as its signpost. That word is dialogue,” he said.

“We know that it is no easy road; it is long and winding, but there is no other way to achieve reconciliation. Let us nurture hope by the power of gestures, rather than by gestures of power,” he said.

“For this, dialogue is necessary, to avoid the growth of suspicion and resentment. Peace is not often achieved by great personalities, but by the daily determination of ordinary men and women,” he added.

Cyprus’ President, Nicos Anastasiades, in welcoming Pope Francis underlined that Cyprus had historically has been a place of peaceful encounter between peoples, cultures, and religions.

“At a time filled with challenges and various problems that plague mankind, your presence here today sends messages of inspiration, courage and hope,” Anastasiades said.

He also thanked the Pope for his symbolic decision to bring home with him 50 asylum seekers.