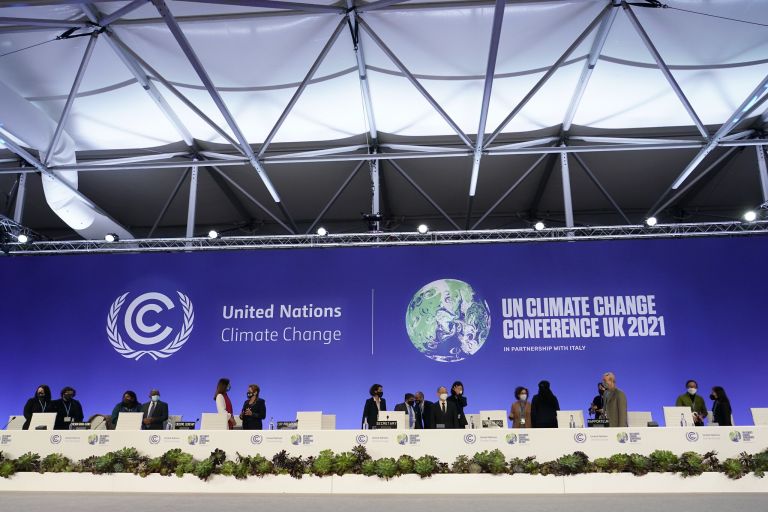 Delegates and officials take their seats for the Procedural Opening of the COP26 U.N. Climate Summit in Glasgow, Scotland, Sunday, Oct. 31, 2021. The U.N. climate summit in Glasgow formally opens Sunday, a day before leaders from around the world gather in Scotland's biggest city to lay out their vision for addressing the common challenge of global warming. (AP Photo/Alberto Pezzali, Pool)

A recent UN report emphatically demonstrated that if we carry on without concrete measures and without checking carbon dioxide emissions, the temperature rise will come much sooner than had been calculated, with dire repercussions for human life and activity.

This past summer, the 10-day heat wave, with temperatures near 45 degrees Celsius, paved the way for a wave of disastrous wildfires all over the country.

Slightly earlier, the well-organised German state faced an unprecedented challenge from unexpected, deadly floods, while in the same period California and northwestern US states saw their forests being ravaged ceaselessly by wildfires for nearly a month.

These are not isolated cases. Every day one sees eerie events, from the rockfalls in Siberia to the melting of glacial ice in Patagonia.

Such climate events are multiplying all over the planet, confirming in the most tragic manner the advance of climate change, which indisputably threatens the human species.

A recent UN report emphatically demonstrated that if we carry on without concrete measures and without checking carbon dioxide emissions, the temperature rise will come much sooner than had been calculated, with dire repercussions for human life and activity.

Scientists’ climate simulation maps show that the situation in 2030 may be nightmarish if measures are not taken.

The sea level will continue rising about 15cm annually, the current of the Gulf Stream will lose its force, monsoons will move further north, temperate zones will be confronted with high rain volumes and incredibly intense flooding, and continental regions will have more droughts and difficulties in the production of agricultural products.

Gradually, according to models designed to specify the impact of the climate crisis, the deltas of large rivers will be lost, the Maldives will be submerged, substantial portions of Piraeus and Thessaloniki will be flooded, and Greece’s entire coastlines and islands will be threatened.

With these and broader warning signs, the UN Climate Change Conference of the Parties (COP26) began yesterday in Glasgow with the aim of undertaking concrete initiatives, enforcing radical measures, and adopting clearer targets for limiting carbon dioxide emissions as well as methane.

The predominant sense internationally is that the climate crisis has arrived and all parties concerned seem to have realised the depth of the problem and the breadth of the threat. There is a pressing need to coordinate actions, to adopt common policies, and to offer aid to poorer countries so that they may suitably adjust.
.
Everyone hopes that agreement will be reached between the leaders, especially of the 20 wealthiest nations, which are responsible for 80 percent of carbon dioxide emissions. They must be the first countries to assume their responsibilities and the cost of the necessary adjustment.

The Greek government and political parties must rapidly adjust, adopt and palpably support – without grumbling or conspiratorial approaches to the issue – policies that can check climate change.

One must launch analytical informational campaigns so that everyone may know that the transition to renewable energy sources is mandated by conditions, and that the use of wind, sοlar, and water power in the production of electricity does no harm but instead benefits the environment and improves the lives of citizens.

Political parties have a duty to directly take a stand, to highlight scientific approaches to dealing with the phenomenon, and to clearly inform the Greek public regarding the consequences of a potential climate change disaster.

We already have the unfortunate experience of the public health crisis. The new surge in the COVID-19 epidemic is simply the result of the spread of unscientific and conspiratorial ant-vax views in Greek society.
It is necessary to defeat and banish them before it is too late.