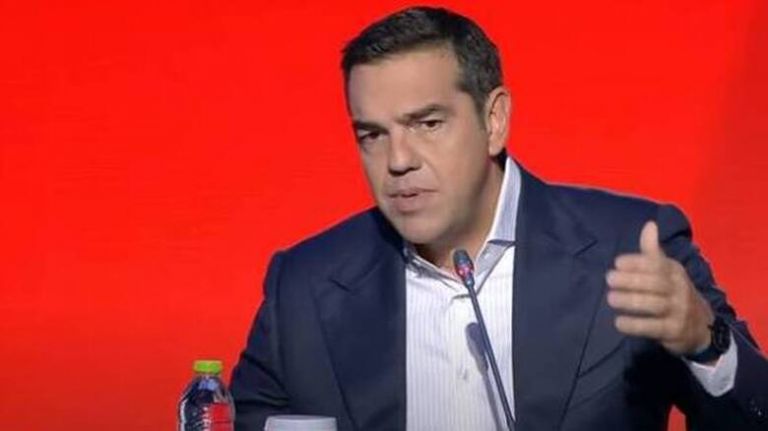 On the COVID-19 pandemic, Tsipras, as he has from the beginning, lambasted the government with the charge that it mismanaged the public health crisis.

SYRIZA’s economic policy as regards bolstering the middle class, youth and pensioners was the central topic at SYRIZA leader Alexis Tsipras no-hold-barred televised news conference today at the Thessaloniki International Trade Fair (TIF), where the underlying message was that his party is ready to rule and create a “progressive government”.

Amidst rampant talk about the prospect of early elections, Tsipras when asked about such an eventuality encouraged the PM to call snap elections if he has the courage.

The main opposition leader and former PM began by accusing ruling conservative New Democracy of neglecting the youth and blaming it for all the ills of society, such as the “corona parties” that trigger the super-spreading of COVID-19.

Although he maintained that SYRIZA has a comprehensive policy to stem the brain drain and ensure a framework of labour relations that will protect them, he offered few details.

Luring the youth vote and reversing the brain drain is a major strategic goal of both SYRIZA and the government.

PM Kyriakos Mitsotakis last week pledged, for example, that he would offer a 2,000 euro monthly salary for doctors who left the country – when they could not find employment during the decade-long economic crisis – and who decide to return to Greece and work for the National Health System, although that would be a relatively small fraction of their compensation in well-paid jobs abroad.

Thousands of doctors left the country during the crisis

Management of COVID-19 pandemic, vax deniers in SYRIZA’s base

On the COVID-19 pandemic, Tsipras, as he has from the beginning, lambasted the government with the charge that it mismanaged the public health crisis.

He said that according to ECDC data Greece proportionally has the second largest number of COVID-19 cases and the second biggest number of deaths, and he noted that since the start of the pandemic PM Kyriakos Mitsotakis twice declared very prematurely and erroneously that the epidemic was over.

Asked about a recent poll that indicated that there is a large percentage of vaccine deniers among SYRIZA supporters, Tsipras said that his party’s support for vaccination is clear, and that the critical objective is to persuade the 45% of the population who have not been vaccinated for various reasons to do so.

Answering a question on how convinced MP Pavlos Polakis after months of wavering to be vaccinated recently, Tsipras said that SYRIZA has a very clear pro-vaccination stance.

He asserted that Polakis is not a vaccine denier and got the job because he wanted to (he had suggested that he would the jab in September once there was more data on its safety).

Analysts have suggested that Polakis’ posture aimed at luring the vote of vaccine deniers with the blessings of Tsipras and his party.

The government has for months used the case of Polakis – who has repeatedly attacked top Greek virologists and other experts and challenged their scientific competence – to hammer SYRIZA with the charge that it has purposely adopted a duplicitous stance.

Plea for citizens to be vaccinated

Tsipras once again directly called on undecided citizens to be vaccinated, especially those over the age of  60, and stated that there is no danger from vaccines unless one adopts conspiracy theories.

He said that compulsory vaccination is the last option in dealing with the epidemic and he called especially on the elderly, who have a relatively low vaccination rate, to get the jab.

Given the fact that the current direct proportional electoral law passed by SYRIZA makes it exceptionally difficult to create a one-party government, Tsipras was asked with which party he might form a coalition government as he intimated  he might do in his TIF address yesterday.

Tsipras skirted the question and said that his would be a progressive government with a vision for the country that would include non-party members distinguished in their field or representing major social groups.

Tsipras said the dilemma of the next election is whether it will result in the creation of a progressive government and whether a majority government will be formed in line with the provisions of the current law – passed five months before SYRIZA was voted out of  power – that provides for proportional representation  – or whether the PM will call a second election under the terms of the new electoral law (2020).

The common conviction is that the PM will almost certainly call a second election if he is unable to secure one-party rule in the first.

Before SYRIZA changed the electoral law in 2019, parties that finished in first place in a general election automatically got a bonus of 40 parliamentary seats in order to allow them to form a one-party government.

A new electoral law passed in 2020 by ND reinstates a bonus for the first party. If it garners 25 percent or more of the popular vote, it will receive a 20 seat bonus and the remaining 280 seats will be distributed with proportional representation.

For every 0.5 percent more than 25 percent, the first party will get a bonus of one seat, with a ceiling of a 50-seat bonus.

As regards the middle class, Tsipras was asked why he objects to PM Kyriakos Mitsotakis’ plan to abolish tax on parents’ gifts of real estate, cash, or stock valued up to 800,000 euros to their children, which the PM argues is a measure that helps the middle class.

Tsipras said it helps only big property owners and that only a small percentage of citizens own real estate valued at 100,000 euros or more. He declared that it is unethical to base a policy of tax cuts on benefiting the rich.

He also posed the question whether the government plans to use EU Pandemic Recovery Fund funds (Greece is to get 30bn euros over time) to support social policy or to help big business.

He said the government’s paramount problem is that it has lost the trust of citizens.

ND shift to the right

When asked about the impression that the Mitsotakis government has shifted toward the right wing of the party, Tsipras said that it was patently obvious.

He said that for a party that has cultivated a moderate profile and says it wants to appeal to centrists, it is oxymoronic to appoint as ministers three ND MP s that had previously served as MPs for the now defunct right-wing nationalist LAOS party – Interior Minister Makis Voridis, Development and Investment Minister Adonis Georgiadis, and in the recent cabinet reshuffle Health Minister Thanos Plevris. “He [the PM] is forced to stand on two boats,” Tsipras said.

Tsipras underlined the view that the PM wants to penetrate far-right electoral base – a large segment of which were far-right Golden Dawn voters until the neo-Nazi party was outlawed.

He underlined that Plevris in the past had expressed anti-semitic views [which he since renounced], and that when the H1N1 virus posed a threat he had opposed vaccination.

“Mr. Mitsotakis owes the far right and must reward it,” Tsipras said.

Tsipras said that the PM didn’t find even a single word to condemn the targeting of migrant kindergartners by ND MP Konstantinos Bogdanos, who retweeted an article which published a list of names of toddlers who are the children of migrants and critised the fact that  they comprised the vast majority of an Athens kindergarten class.

Tsipras said it was ironic that the next day the PM publicly gave Greek citizenship to the mother and brother of NBA star Yannis Antetokounmpo.[the naturalisation had been approved the naturalisation one week earlier].

Tsipras said ND has a Janus face, that on the one hand it courts the far right to get Golden Dawn votes and on the other wants to display a moderate image .

He said the basic problem is that the government has no national strategy. Regarding the recent harassment of a research vessel south of Crete by Ankara, Tsipras said this does do not surprise him as Turkey disputes Greece’s EEZ.

He said the PM made a serious mistake when he said Greece’s red line is defending its 6nm of territorial waters because Athens has the right under international law to extend them to 12nm.

Essentially, Tsipras said the PM is soft on Turkey and he cited an incident in April when Turkey blocked a French research vessel operating in Greece’s EEZ and the government declared it was solely a French affair. » Why wonder today that Turkey does it,» he said.

He said that in discussions on upgrading the EU-Turkey trade agreement the government should have said that Greece and Turkey going to the International Court of Justice in The Hague to settle their differences is a precondition for Greece’s approval.

SYRIZA and the middle classs

Responding to Mitsotakis’ claims that SYRIZA destroyed the middle class through over-taxation, Tsipras  conceded that he was forced to burden the middle class because there was a pressing national need to exit the bailout memorandums.

“Things happened that were not our choice,” he said.