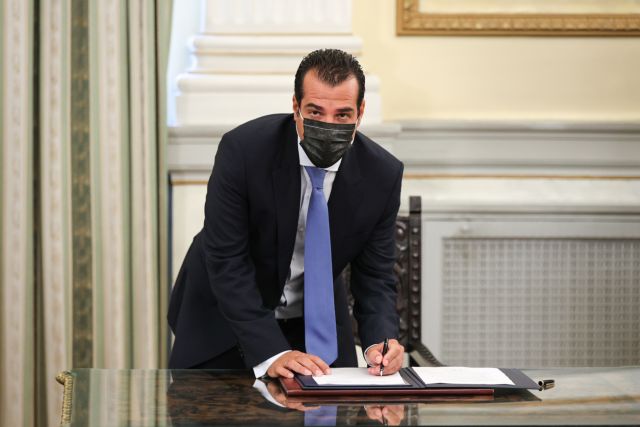 He issued an apology for past statements he made as the defense counsel for his father, whom critics in the country and abroad consider a Holocaust denier

Greece’s new health minister, Thanos Plevris, on Wednesday afternoon issued an apology for past statements he made as the defense counsel for his father, whom critics in the country and abroad consider a Holocaust denier, and following a same-day critical announcement by the Central Board of Jewish Communities in Greece (KIS).

The group took particular offense to a convoluted but highly inflammatory remark by Plevris, made before an appellate court where his father was the defendant, and revolving around the Auschwitz death camp. At the time, in his closing argument, the new health minister, at the time, had said, “…You are concerned about the reference to Auschwitz. The one that says ‘to keep the camp of Auschwitz in good conditions’. I will examine the most extreme interpretation. That the defendant with this reference means: ‘Keep the camp of Auschwitz in good conditions because I want, at some point, the national socialist regime to come back; Hitler to come back, take the Jews and put them in Auschwitz’. What kind of instigation is this? What incitement is this? Is it that one is not allowed to believe and want to believe that ‘I want to exterminate someone’?”.

In issuing a very high-profile apology just a day after being appointed to his first Cabinet portfolio, Plevris on Wednesday said “…Respect for the victims of the Holocaust of the Jews is absolute, and I am opposed to any form of anti-Semitism. I have demonstrated this in many public statements … KIS’ objections to my person, due to my closing statement as the defense counsel for my father, with whom I completely disagree, are understandable. Never, however, did I mean to insult the Jewish people, and I apologize if I have done this. I am sure that with my actions as health minister I will alleviate even the slightest misgiving of those who question my respect for the Holocaust of the Jews, and they will realize that I harbor no anti-Semitic feelings.”

The umbrella group of Jewish communities in Greece earlier called on the “…new Minister will address all citizens equally, regardless of skin color, race or religion.”