Taliban spox issues ultimatum to US; refers to women’s status under fundamentalist rule, in interview with Athens-based Mega channel 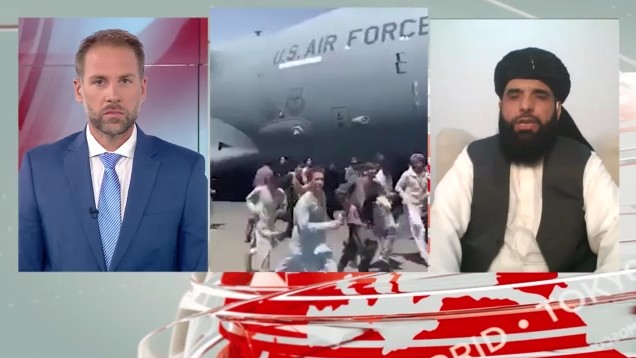 Mega Channel’s prime-time evening newscast with Rania Tzima broadcast an exclusive interview on Tuesday with Taliban spokesman Suhail Shaheen, who spoke with reporter Giannis Moutsios about the “next day” in conflict-ravaged Afghanistan

Shaheen referred to the role of women under the again resurgent Taliban, in his first-ever remarks to Greek media.

In burnishing the Islamist ultra-extremist movement’s more “moderate credentials” in the wake of their lighting conquest of most of the central Asia country, he claimed that the aim of the new regime is to build a nation of freedom, independence and peace for all Afghans.

In a more ominous statement, however, he warned the United States to evacuate its remaining forces – most concentrated at the Kabul international airport – by August 31, saying failure to do so will constitute a “violation” and lead to conflict.

Asked about the role and status of women, he said “…Women continue their education; girls go to school and, of course, they continue to work. When I refer to students, I am talking about students who go to their schools. They will enjoy all rights to access education and work. The only thing that changes is that, now, the use of a hijab is mandatory. ”

The militants’ spokesman said Afghans who collaborated with foreign powers and the previous governments over the past 20 years would be granted amnesty, whereas a new wave of migration from the land-locked country is due to economic reasons and not out of insecurity with Taliban rule.