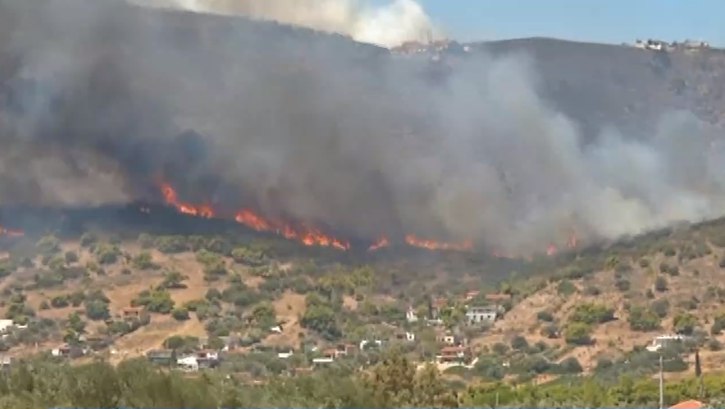 An employee of the municipality saw a white vehicle setting fire to bins at the place where the fire broke out – What Mr. Dimitris Loukas emphasizes

The fire in Keratea is in progress. Firefighters, ground and air, are trying to contain it but strong winds blowing in the area are not their ally. Three settlements have already been evacuated, namely Markati, Synterina and Agios Konstantinos, while the traffic police has suspended traffic.

At the same time, there are questions about how the front started

The mayor of Lavreotiki, Dimitris Loukas, speaks of arson. Speaking on SKAI 100.3 radio, he noted that it was arson, as a municipal employee saw a white vehicle setting fire to bins at the point where the fire broke out.

The same was said on SKAI TV by the deputy mayor of Lavreotiki, Thanasis Makrodimitris. As he said, the employees of the sanitation service saw a white car with tinted windows, from which the passengers threw something and immediately afterwards a fire spark was created at the spot.

It is noted that, by order of the Chief of the Fire Brigade, Stefanos Kolokouris, a team from the Arson Crimes Directorate goes to the area to investigate the causes of the fire.

However, the fire is considered difficult, due to the strong winds that blow in the area. In fact, the fire brigade has been strengthened. 71 firefighters with 25 vehicles, 3 groups of fire fighters on foot are fighting with the flames, while 6 aircraft and 4 helicopters are dropping water from the air. The fire broke out in low vegetation in an inaccessible place and quickly spread, due to the strong winds that are blowing in the area.