Turkey on Varythymiadis deportation – “He is an ordinary citizen” 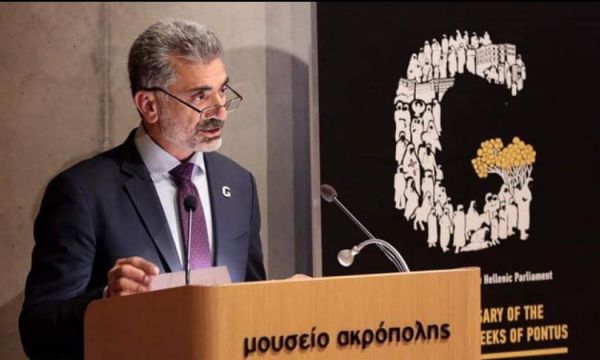 In a statement issued by the Turkish Foreign Ministry, it is claimed that Mr. Varythymiadis does not hold “any official title” and that “he did not meet the necessary conditions to enter the country.”

Ankara responds provocatively to Athens’ objections to the detention and deportation of the president of the Pampontian Federation of Greece, George Varythymiadis, who was to attend as a representative of Pontian Hellenism, at the Patriarchal Divine Liturgy at Panagia Soumela.

We remind Greece that the authority to set out entry conditions into a country is the sovereign right of every state.

The Greek citizen, who did not meet the necessary conditions of entry, was denied entry into our country and was sent back to his country following the completion of the process, run in compliance with the rules of the International Civil Aviation Organization (ICAO) and our laws. During the process, he was enabled to get in contact with his Consulate.

The reaction of Athens

It is noted that Athens reacted with an extraordinary demarche to the Turkish Foreign Minister to the illegal detention of the WTO president and his deportation by the Turkish authorities.

“On the instructions of Foreign Minister Nikos Dendias, the Embassy in Ankara handed an emergency demarche to the Turkish Foreign Ministry regarding the abusive detention and deportation order against the President of the Pampontian Federation of Greece. Mr. Varythymiadis went to Istanbul today in order to attend as a representative of the Pontian Hellenism, in the Patriarchal Divine Liturgy in Panagia Soumela Trebizond “, the announcement states.

Sources in Athens, however, estimated that the blockade on Mr. Varythymiadis is beyond the possible priorities of the Turkish Foreign Minister, “photographing” that the specific decision on the -active on issues of recognition of the Pontian genocide and competent author- deportation of Mr. Varythymiadis, may have been taken higher …

However, this is yet another Greek of Pontic origin who was stopped at the border in the last three months and was not allowed to enter Turkey.

Information from the website pontosnews.gr states that the Turkish authorities yesterday banned the entry of a Pontian from Thessaloniki, who was also traveling by road to Trabzon and Panagia Soumela. In contrast to George Varythymiadis, this has nothing to do with the organized Pontian interests.

On July 14, Rozalia Eleftheriadou, a professor of musicology, was considered persona non grata, also for an unexplained reason, and remained in custody at Istanbul airport for 24 hours and finally returned to Greece without completing her trip to Pontus.

These names are to be added to those of Costas Alexandridis, president of “Momogeron”, runner George Zachariadis and writer Michalis Kaikounidis, who also do not have the right to enter Turkey. The first was deported in January 2020 and the last two in July of the same year.