Aegialia – The big fire is raging, 16 people are injured [Video] 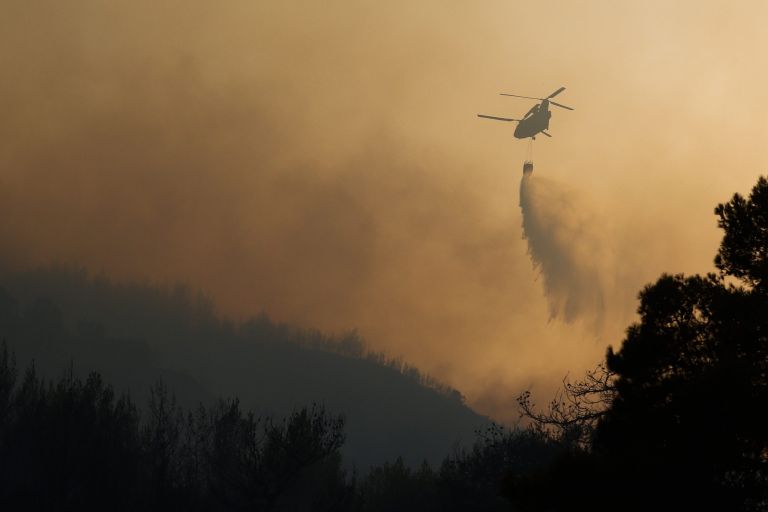 Since the crack of dawn, two firefighting planes and four helicopters are operating

Two firefighting planes and four helicopters started with the first light of day continuous firing on the fire front in the wider area of ​​Ziria, in Egialia.

At the same time, reinforced ground firefighters, who fought the flames all night, are continuing their efforts, supported by the air force, to reduce the fire and bring it under control. According to the Fire Brigade, there are 294 firefighters operating in the area with 77 vehicles and seven sections on foot, as well as the motorized special department of firefighting operations, while the work of the forces is coordinated by the Chief of the Fire Brigade, Lieutenant General Stefanos Kolokouris.

Also, the work of the fire brigade is assisted by volunteer firefighters, water tankers and work equipment of the local government.

According to the police, the traffic of vehicles from the area of ​​Lampiri to Ano Ziria has been stopped.

Sixteen people have been injured in the devastating fire at this point.

15 cases of respiratory problems were reported at the hospital of Aigio. Seven of them – six citizens and one coast guard officer – remain, according to the 6th Health District, hospitalized for precautionary reasons. Their state of health, however, is not a cause for concern. The rest left.

A burn victim from the area of ​​Ziria was admitted to the general hospital of Agios Andreas (Patras). According to the 6th Ministry of Health, he underwent successful plastic surgery. He is being treated without endangering his health. “The health system will continue to be in a high degree of readiness for the next few hours,” according to the same source.

“From the first moment that the conflagration broke out in Aegialia, under the emergency conditions that were created, all the health units of the wider area were put on full alert”, it is noted in a statement issued by the 6th health district.

In particular, according to the 6th Health District, “in the hospital of Aigio, in the university hospital of Patras and in the general hospital of Agios Andreas, all the medical and nursing staff was immediately mobilized, while the ambulance network was put on alert”.

The Minister of Health, Vassilis Kikilias, had the full coordination of the actions for the readiness of the health system. The health district was in constant collaboration with the General Secretariat for Civil Protection and EKAB.