Editorial: Combating the circle of backwardness

Vaccine deniers understand that they too are in danger only when they confront serious illness – which they thought they could escape scot free – and are a step away from intubation in a hospital ICU. 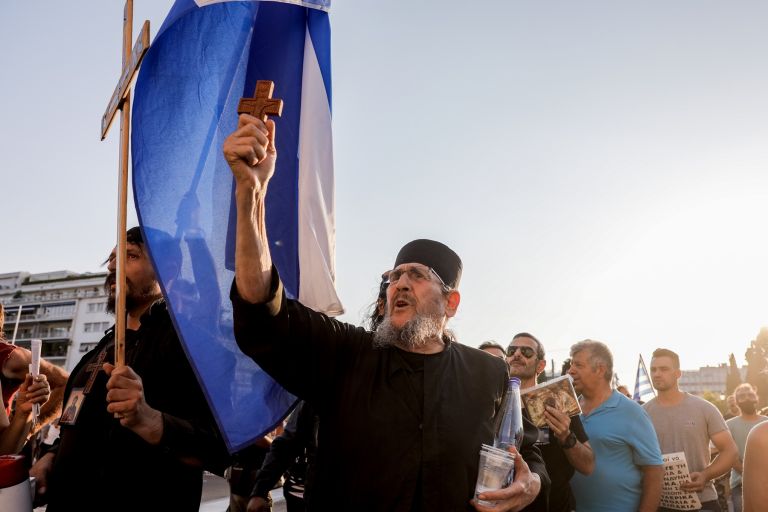 Anti-vaccine groups, extreme right ideologues, fanatical religious zealots including Old Calendar Orthodox Christians, outlandish conspiracy theorists who disseminate unfounded theories and see enemies everywhere, deniers of science and progress in general, and supporters of a fortress-Greece all together paraded in a demonstration on 14 July in Syntagma Square in Athens, literally obstructing the country’s effort to free itself from the bonds of the fierce and deadly COVID-19 epidemic.

It is the same circle of backwardness that in 2000 struggled against the new state IDs because they did not record religious affiliation, which never accepted legal abortions because they did not accept a woman’s right to do as she will with her body, and who conducted huge protests against Greece recognising its northern neighbour as North Macedonia.

Now, this motley crew is playing around with the lives of others, and it is hiding behind all the rest of us who assumed the (very small) risk of being vaccinated in a timely manner in order to open up social and economic activity, to allow our children to return to school safely in September, to re-open our universities at long last, and to restart the entire country so that it may transcend the successive crises that have kept it down for over a decade.

Clearly, one cannot converge or reach an understanding with these groups. It is not even an issue of persuasion or communication. These categories of our fellow citizens already had strong convictions before they hit the streets, as they had already absorbed the propaganda in social media and the web more generally in order to bolster their unscientific arguments.

They cannot, or more likely do not, want to understand the simplest of facts – that for COVID-19 there are no borders, colours, or nations. It attacks everyone everywhere, in Europe, Asia, America, and Africa.

They understand that they too are in danger only when they confront serious illness – which they thought they could escape scot free – and are a step away from intubation in a hospital ICU.

Thus, they effectively act, with no sense of social responsibility, as saboteurs of every effort to manage the public health crisis.

It would come as no surprise if one were to find that the same circles are leading the charge in demanding state economic measures to handle the repercussions of the pandemic and in demanding the opening up of restaurants and the economy more generally with no public health restrictions.

Unfortunately, political parties at times, depending on the confluence of events, have courted this circle of backwardness. They exploited the dynamics of the activity of deniers that they believed serve their political objectives and sometimes even coordinated with them.

They offered those in the circle of backwardness room to operate and coddled them. Now they are paying for their toleration of and compromises with this lethal motley crew.

Now, there is absolutely no room for toleration and compromise. What is at stake now is public health and the reorganisation and rebirth of the country.

The state has a duty to take all necessary measures to rein in their fixations and stupidities. It must act with the requisite decisiveness, with no second thoughts or reservations.

For the country, a swift exit from the public health crisis is nothing less than a matter of survival.

This is the superlative, overarching need that the government and the opposition must jointly serve.