Tatoi Estate: The known and unknown treasures of the former royal family

2021 has proved to be a rich year in terms of locating “unknown” or “lost” objects and architectural elements, which come to function as tiles in the puzzle of the estate located within the Parnitha National ParkSHARE 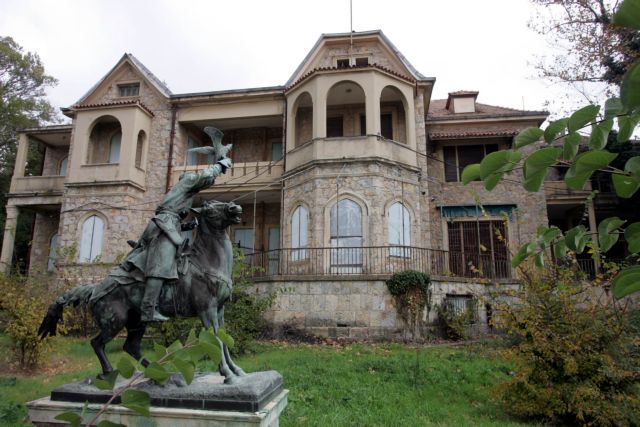 The news of rare alcoholic beverages, collectible bottles or even unknown in the Greek market soft drinks may have made the rounds of the Internet and once again turned eyes to the former royal estate of Tatoi, however, this discovery, announced by the ministry Culture, is not the first for 2021.

This year has proved rich in locating “unknown” or “lost” objects and architectural elements, which come to serve as tiles in the puzzle of the estate located within the Parnitha National Park.

The beginning was made in March with the discovery of a lost planter (pot) in the garden of the Presidential Palace.

The discovery of objects that come mainly from the 1,600 acres which constitute the historical core of the estate (there are 55 buildings, of which 27 are classified as monuments) and have belonged to the Greek State since 2003, continued in early July with the bell that had the character of an alarm clock of the estate. The fan-like staircases the adjutancy followed, leading to the bottles of spirits.

Some of these revelations are due to the progress of the maintenance work of the objects coming from the buildings of the estate, which are carried out by the competent services of the Ministry of Culture, and others to the cleaning of the Civil Protection agency implemented on the initiative of the association “Friends of Tatoi Estate” . Given that work on the site continues in view of the implementation of the feasibility study of the estate, the next revelations are a matter of time.

The lost pot with enamel decorations

One of the four pots that adorned the palace garden of the main building and which was considered lost was the first discovery related to the Tatoi estate, last March. The Paris-made iron pot is has plant enamel decorations. It was located at the Presidential Palace. This particular one along with the other three of Tatoi were located in pairs, right and left, at the top of the stairs leading to the level of the pool. Respectively, they are still today in the large internal, front staircase of the Greek Parliament building that leads to the Eleftherios Venizelos Hall, on the second floor, while according to the historian Costas Stamatopoulos, as mentioned in a relevant post on the website of “Friends of the Tatoi Estate”. four more are kept in the warehouses of the National Historical Museum in the building of the Old Parliament. They all bear the emblem of King George I and consist of six pieces of iron with wreaths that fasten them inside, while at the ends they have the heads of lions.

One of the three planters in Tatoi has bullet marks on the emblem. A guerrilla shouting “I am George III too!” shot at the depiction of the crown in the summer of 1944 and the bullet holes are the only traces of that turbulent period in Tatoi. All four pots are planned to be placed in their original locations after the completion of the works on the former royal estate.

The bell hidden behind the ivy

It was the turn of the “lost” bell, which was hidden by a climbing plant – an ivy – in the first days of July, as a result of which it has not been visible for the last 54 years. The bell arrived in Greece from St. Petersburg thanks to Queen Olga and was not associated with any church on the estate, but had the role of a clock and sometimes an alarm. It regulated with its ringing the whole life of the farm, such as the beginning of the works on the estate, the lunch break, the schooling. It was the same bell that was sounded during two of the three great destructions of the estate, in the fires of 1916 and 1945. On its surface is engraved the inscription “Tatoi 1895” and the monogram of King George I.

Its original location is not exactly known. In a photograph of the estate in 1900 there is no bell in the place it is today, ie on the southeast side of the Stable building. It may have been transferred there later, but if this version is valid both the cause and the time at which it was transferred remain unknown. Experts place it among the most historic movable objects of the estate, however its state of preservation is not good. It is deeply oxidized and its base needs immediate restoration, otherwise it is in danger of destruction.

Less than a week after the bell was “located”, another unseen until recently piece of the history of the former royal estate came to light thanks to the cleanups carried out by the Civil Protection Agency. These are the stairs in the courtyard of the Lodge that were “buried” under the vegetation. The stairs connected the upper level of the garden of the adjutancy with the lower and the main palace garden. The form of the stairs refers to open fans and chronologically it is estimated that they belong to the building, which was erected by the then young and unknown (at the time) architect Savvas Boukis in 1892 and is an exact copy of a small villa in Bernstorf, Denmark. In fact, it is not excluded that the surrounding area together with the stairs are his own work.

It is worth noting that this building served as a backdrop for important political developments, as the first of the two secret meetings of the two most important political leaders of the time – Giorgos Papandreou and Panagiotis Kanellopoulos – took place at the end of November 1966. which aimed at the fall of the “coalition” government and the opening of the path for elections. From the royal side, the head of the king’s political office, ambassador Dimitrios Bitsios, as well as Constantine’s supporter and friend, Michalis Arnaoutis, were present.

The whiskey for the enthronement of Queen Elizabeth

The most recent discovery concerns the wine cellar with the rare wines and spirits found on the former royal estate. The existence of the wine cellar has been known for a long time to the competent services of the Ministry of Culture, when the evacuation of the palace residence began in order to preserve the objects it contained. However, it was not until Sunday that it became known that the wine cellar contained bottles of Château Margaux, Château de Vincennes and Château Rothschild, as well as collectible beverage bottles, such as the special bottling of Chivas whiskey in a ceramic bottle to celebrate the enthronement of Queen Elizabeth. These bottles are part of the contents of the 235 boxes with the approximately 4,000 bottles of wine and drinks, with labels of special artistic and historical value. Among the bottles – the contents of some of which are considered suitable for consumption despite the fact that their storage conditions were far from ideal – a rich collection of bottles with labels from the production of the estate itself was found . Among them is the popular in the Athenian market “Tatoi” with the emblem of the vine leaf and the crown on the edge of the label, which began to circulate on the market in 1950 along with the established “Dekelias Tower”, as we read in the “Chronicle of Tatoi” by K. Stamatopoulos (Kapon publications). Of particular interest are the rare cans of soft drinks, which were not imported to Greece at that time. Surprises may not be over, as the examination of another 300 boxes is pending by winemaking experts, who provide the relevant know-how so that the bottles can be evaluated and separated according to their rarity and condition.