An innovative system will predict where a fire has broken out

Researchers at the National Observatory’s Beyond Center have developed a system that can detect the point of a potential fire by sending a targeted distress signal. 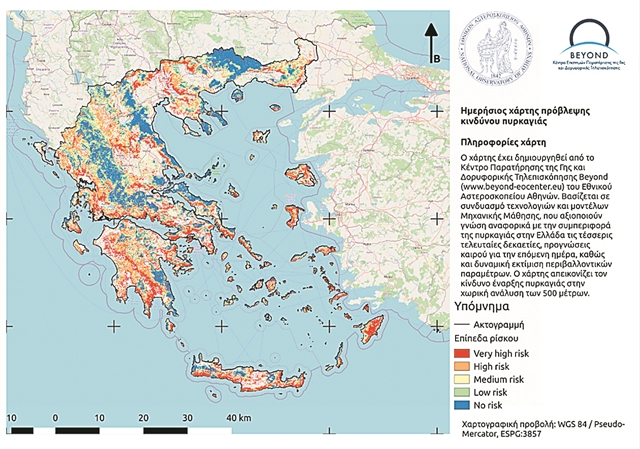 An innovative system that can predict where a fire is expected to break out on Greek territory in the next 24 hours with a spatial analysis of up to 500 meters was created by researchers at the Beyond Earth Observation and Satellite Monitoring Center of the National Observatory of Athens. The system produces daily detailed forecast maps, utilizing the most modern technologies in the field of satellite imaging, while its pilot forecasts have already been verified with absolute success in the recent fires of Cephalonia and Nea Styria in Evia.

More than 80,000 acres have burned this year from May 1, the day of the start of the fire season, until June 30, while in the last 10 days there have been nine other large fires that have reduced thousands of additional acres of land to ashes. More devastating was the fire in the Geraneia Mountains, where almost 5,200 hectares of forest were lost, but also the fire that burned from 2 to 4 July in the Municipality of Eleios-Pronnon in Cephalonia, where according to initial estimates at least 600 hectares were burned.

In the last period and following the prolonged heat of the previous days,  there is a significant increase of the fire fronts in Greece. It is indicative that from Saturday until Sunday morning, in a period of 24 hours, according to the Fire Service, 187 urban and forest fires broke out on Greek territory.

The Beyond Center of the National Observatory, under the Scientific Director of Research Dr. Haris Contoe, has been developing the FireHUB service system, which is a unique tool in the hands of the State and is freely provided to the Operations Center of the Fire Service. Through this, the fires in Greece are detected in time, their evolution is constantly monitored every five minutes at a spatial resolution of 500 meters, the smoke is forecast and the burned areas are mapped after the disaster by assessing the damage to infrastructure, citizens’ property. and to the natural environment.

Since the summer of 2020, the Center has piloted and operated a new national fire risk forecasting service for the day after, which takes into account a variety of factors and not just meteorological data, as was the case before.

Now, researchers at the Beyond Center go a step further by creating a system that can accurately predict the point of a potential fire by sending a targeted distress signal. This is achieved by the daily production of fire risk maps for the next day at a spatial resolution of 500 meters. As the observers of the Observatory point out in newspaper :NEA”, during the test operation of the system, the resulting fires were, in their vast majority, in high-risk areas that had been predicted from the previous day. The recent cases of Cephalonia and Evia are indicative. The researchers point out that the fire risk forecasting service has been developed with original machine learning techniques, which are based on the history of fires they maintain since 1986, combined with extensive meteorological and satellite data.

The innovative system has so far been used exclusively by researchers, but in the coming days representatives of the Beyond Center are expected to present it to the General Secretariat for Civil Protection, in order for it to be actively involved in the planning of the State and to be utilized by the relevant services. Such a development would be extremely critical, as it would facilitate timely, targeted interventions while preventing major disasters.