Christos Pappas: The parliamentary works and days of the man who was on the lam until yesterday

He was the self-styled “theoretician” of the group. Even “his own” people referred to him as [top Nazi Hermann] Goering and his parliamentary presence was marked by his audacity. 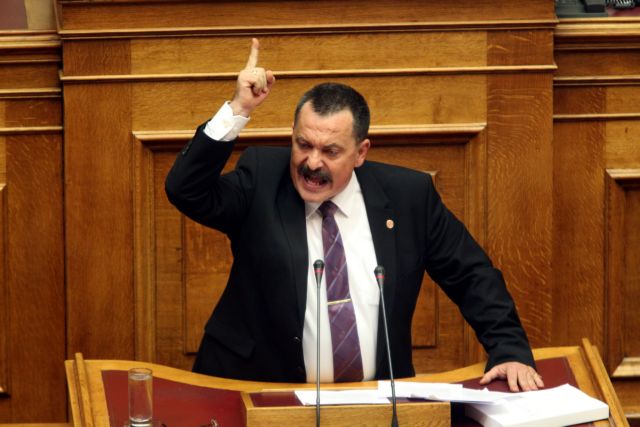 Christos Pappas of the now defunct far-right Golden Dawn party was no run of the mill cadre of former party leader Nikos Michaloliakos.

He was the self-styled “theoretician” of the group. Even “his own” people referred to him as [top Nazi Hermann] Goering and his parliamentary presence was marked by his outrageous audacity.

Protected by parliamentary immunity, Pappas cursed at Manolis Glezos [a national icon who bravely removed the Nazi flag from the Acropolis during the German occupation], calling him an “old geezer” and a “Stalin-Evzone” [Nazi collaborator].

He played a leading role in attacks against the organisers of the theatrical play “Corpus Christi” and in the process freed a troublemaker from a police bus.

Pappas verbally attacked then finance minister Yannis Stournaras (who is currently Governor of the Bank of Greece) during parliamentary debate on Greece’s third bailout memorandum, blurting out with a horrid tone of voice, “You will listen to me…Do you know that little song ‘Don’t cry for me Argentina’?”

He sued author Petros Tatsopoulos (then a SYRIZA MP) because he referred to Golden Dawn MPs as “pimps”.

He is the man described by his fellow MPs as the darkest div ever to serve in Parliament and who promoted himself as the “number two” of the nationalist grouping and as co-founder, along with Michaloliakos, of the Golden Dawn party.

Nikos Pappas was a statewide MP of the self-declared nationalist alliance, and the owner of a furniture store in Ioannina, who described himself as an “ideologue”.

What kind of ideologue?

For example, in the Golden Dawn magazine entitled “Antepithesi” [counter-attack, issue 20] (which at the time offered a scarf featuring the ancient gammadion, which is similar to the Nazis’ blood-stained swastika) he wrote a pseudo-profound article.

“Whether or not in the end it [the swastika flag] was saved, as in 1923, or was crushed into the ground over which it first waved in the modern era, spiritually it continues to wave, emotionally moving the souls of millions of faithful.”

That article was signed by Nikos Pappas who illustrated it with photographs of Hitler “blessing the banners of the SA with Blutfahme” or of Hermann Goering “wearing the helmet of the Freikorps bearing the swastika”.

Pappas’ CV state that he “comes from a family that gave Greece priests and military men”. His father, Elias Pappas was indeed an artillery officer who, however, was loyal to the leader of the colonels’ 1967 military coup, Georgios Papadopoulos.

Christos Pappas on his personal webpage wrote about his father.

“On the night of 20 toward 21 April, 1967, while serving in the Second Staff Office of the Hellenic Army General Staff, he was in the trusted inner circle of Georgios Papadopoulos, to whom he remained faithful until the very end.”

This man who sang the praises of Hitler and visited as a pilgrim the grave of Benito Mussolini in town of Predappio, Italy, served as a statewide MP in the Greek Parliament.

He is still remembered by Benicio Di Ferrini, the owner of a tourist shop named “Ferlandia” in the town of Mussolini’s birth, who when asked about the name Christos Pappas enthusiastically cried out, “Fratello Christos, Christos deputato…”