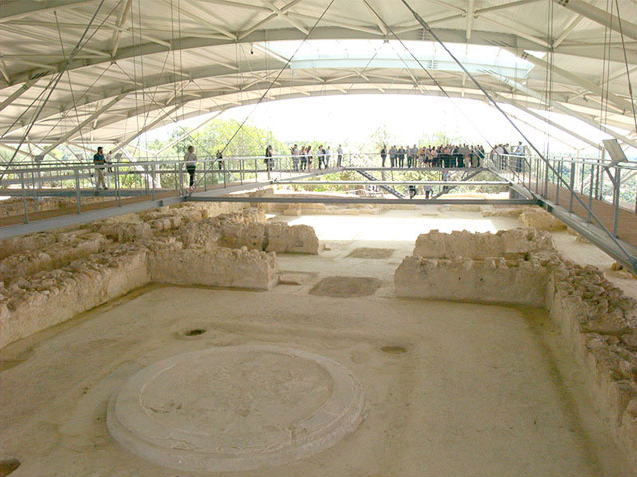 Mycenaean Pylos, the second largest center of the Mycenaean world after Mycenae

One of the most important archeological sites in the whole Peloponnese, the Mycenaean palace of Nestor, is located near the town of Trifylia, a Mediterranean town in Messinia.

At Epano Englianos, southwest of Trifylia Town, travelers discover a very interesting archaeological site, that of Pylos, which was the second largest center of the Mycenaean world after Mycenae. Pylos was founded by Nileas, son of Poseidon and Tire, who founded the Nileid dynasty.

Nileas was succeeded by his son, Nestor, a Homeric hero, who took part in the hunting of the Caledonian Boar, in the Centaur War, in the Argonaut Campaign and, at an advanced age, in the Trojan War. The ruler of Pylos was distinguished in the Trojan War for his courage, prudence and eloquence.

The two-storey palace complex of Pylos was decorated with colorful murals. Its most important compartments are the large rectangular “throne room” with the circular hearth, the bath with the clay bath and the storerooms with the numerous storage vessels.

The study of the texts of the plaques found in the palace complex, on the one hand, confirmed the correctness of the decipherment of the Mycenaean script (Linear B) by Michael Ventris and John Chadwick, on the other hand, did not offer much evidence for the craft and commercial activity. palace.

The palace complex of Pylos flourished from 1300 to 1200 BC. approximately, and was destroyed by fire in the early 12th century BC.

The palace of Nestor is not the only important ancient monument in the wider area of ​​Chora Trifylia. The Mycenaean tomb near the palace, the Mycenaean chambered tombs (Mycenaean cemetery) at “Volimidia”, near the Archaeological Museum of Chora, the Mycenaean tomb on the way from the palace of Nestor to the village of Koryfasio, the “tomb” of Thoras ruins of a Mycenaean (vaulted tomb) on a hill above the famous Voidokilia, in combination with the excellent exhibits of the Archaeological Museum of Chora, reveal the diverse activity that had developed in the area during the Mycenaean Times.