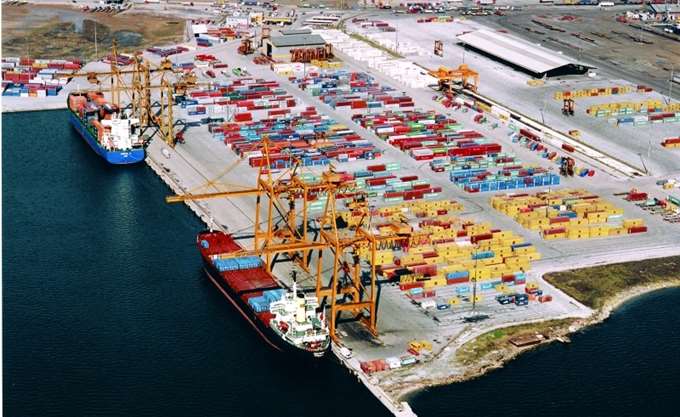 The project “6th Pier, port infrastructure expansion” is the most important part of the Compulsory Investments of € 180 million undertaken by OLTH SA in accordance with the Concession Agreement between OLTH SA and the Greek State

Giant containerships (24,000 Teu) will dock at the port of Thessaloniki with the completion of the mandatory investments, the implementation of which is proceeding at a fast pace, as noted yesterday at the general meeting of Thessaloniki Port Authority OLTH SA by its executive chairman Athanasios Liagos.

The project “6th Pier, port infrastructure expansion” is the most important part of the Compulsory Investments of € 180 million undertaken by OLTH SA in accordance with the Concession Agreement between OLTH SA and the Greek State. With the implementation of the project, the port of Thessaloniki will be able to serve Ultra Large Container Vessels ships, with a capacity of 24,000 TEUs and in this way it is possible to use, to the maximum extent its comparative advantage, as a seaport of Southeastern Europe.

This project upgrades the position of the Port of Thessaloniki in the global port industry and in the supply chain sector while offering strong multiplier benefits to the economy and society, at local and national level, Mr. Liagos stressed.

As it is known, on February 5, 2021, binding financial and technical bids were submitted for the 2nd Stage – Invitation to Bids for Pre-selected Candidates, for the nomination of Contractor of the Project “6th Pier, Port Infrastructure Expansion”. The 2nd Stage of the Tender (evaluation of the submitted bids) for the promotion of the Project Contractor is in progress.

As Mr. Liagos added, this project is a Strategic Development Project not only for Northern Greece but also for the position of the country in the transport networks of SE Europe.

Also regarding the other investments, it should be noted that OLTH SA received a LIEBHERR Motor Crane worth € 3.9 million. The new Motor Crane, with a maximum lifting capacity of 144 tons, has been put into full operation.

In addition, OLTH SA signed a contract for the supply of two new Cranes, worth € 15.8 million. Their arrival is scheduled for December 2021.

In the framework of the equipment upgrade program and consequently the substantial upgrade of the services provided so that the Port of Thessaloniki is a protagonist in the development of combined transport to and from Southeastern and Central Europe by attracting mainline ships, OLTH SA, in addition, has invested in the supply of 12 Straddle Carriers with the possibility of stacking containers 3 levels high, a possibility that the existing equipment did not have. The carriers are worth € 9.7 million, and are in full operation.

Of particular importance for its administration is the license of an Authorized Economic Operator (AEO) for Security and Protection (AEOS) obtained by the Independent Public Revenue Authority.

The strategic role of the Port of Thessaloniki in the development of the international supply chain with the neighboring countries of the Balkans and Southeastern Europe is further strengthened by safe and reliable customs control procedures that meet the highest criteria, the management stressed.

A decisive contribution in this direction is the establishment of a subsidiary company in the Ilienci area in Sofia, Bulgaria under the name “ThPA Sofia EAD”.

The Bulgarian dry port has a direct railway connection with the Port of Thessaloniki with 3 routes per week, being an important commercial station and a modern development center that will be connected by rail with a series of dry ports in Southeastern, Eastern and Central Europe, contributing significantly to the reinforcement. of the export activity of a variety of companies.

Among the strategic goals set by the Port of Thessaloniki, is the promotion of Thessaloniki as a cruise destination, increasing tourist traffic, in order to strengthen both the local and the wider region of Northern Greece in economic and social terms.

This year, after 15 years, the Port of Thessaloniki, having implemented all the necessary health and safety protocols and having responded effectively to the recommendations of national and regional authorities of health and civil protection, was included in the List of Home Ports, ie designated as a port of departure and cruise termination with the possibility of boarding and / or disembarking passengers.

Another strategic goal of the Port of Thessaloniki is the development of the direct Ferry Connection of Thessaloniki with the islands of the Sporades, satisfying a constant request of the passenger public and the transport companies. Starting on June 19 and until October 3,