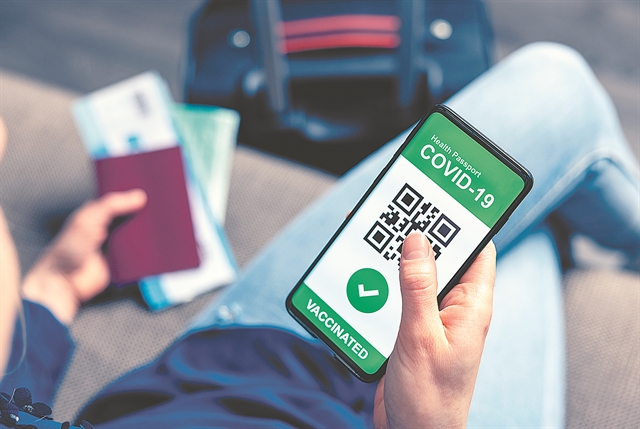 The first patient to be hospitalised this year in a Greek hospital ICU due to COVID-19 complications is a 65-year-old Russian man who reportedly entered Greece by presenting a forged PCR test.

That case intensified the concerns of Greek authorities because last year as well they had caught foreign tourists with falsified certificates.

Those cases were mainly at Greece’s land borders and almost exclusively concerned travellers from Albania.

This year emphasis will be placed on checks at the Greece-Albania borders as well as on visitors from non-EU countries in general which do not issue electronic (easily verifiable) vaccination certificates.

Europol has repeatedly warned all countries’ security authorities regarding diagnostic checks of whether someone has fallen ill with COVID-19 or has been vaccinated, given the fact that technology that makes it possible to forge a document, such as high-quality printers and advanced software, is widely available.

Over the last few months Greek security forces have intensified checks and have uncovered an illegal forged documents ring.

There were arrests in the UK (where fake certificates are sold for 100 pounds sterling each), at Charles de Gaulle Airport in Paris, and in Spain, where they cost 40 euros.

In Germany, multiple police operations were organised to root out gangs that printed and sold bogus negative COVID-19 test certificates.

Two arrests in Berlin revealed a well-organised network that the used the messaging app Telegram to communicate with prospective clients who paid between 80 and 100 euros for a certificate.

In Germany certificates are not digital as they are in Greece and that multiplies the capability to forge them.

The same applies to certain other European countries that have not yet joined the joint certificates platform and continue to issue printed and even manuscript certificates which are obviously easier to forge.

The approved EU Digital COVID Certificate is the only way to shield member-states from the threat of admitting tourists with bogus certificates.

The dark web has a bit of everything

“In the first months after the outbreak of the pandemic we recorded the trade in masks, disinfectants, and protective gear via the dark web,” Oded Vanunun, the head of product viability research at Check Point Software Technologies, told To Vima.

The dark web functions as a parallel internet that is invisible to search engines and that one can navigate with special software. It is a black market hotbed that is often used for criminal activity.

Check Point Software Technology researchers discovered that on the dark web various supposed therapies and medicinal treatments to combat COVID-19 were on offer.

The illegal trade in vaccines began last autumn, beginning with the Russian Sputnik-V and the Chinese Sinovac, but gradually all the other approved vaccines were added to the list (though it is unclear whether they are genuine).

In total, 1,250 sellers of illegal vaccines have been nabbed, about double the div at the beginning of the year.

The tip of the iceberg

Researchers have identified 150 channels for the trafficking of forged documents, but they stress that “this is only the tip of the iceberg”.

Mr. Vanunu notes that although there have been no efforts witnessed to sell or trade forged certificates in Greece, it is quite possible that this summer individuals may attempt to enter the country with documents that are false or have been tampered with.

He maintains that the only way to confront the phenomenon is to create a global database which national authorities can use to verify the authenticity of a certificate.

Greek Ministry of Digital Governance sources told To Vima that it is practically impossible to forge the EU Digital COVID Certificate and that at least as regards travellers from member-states that have adopted it there will be no problem.

The same applies to the domestic certificate due to its use of cryptography and multiple security measures. In the photo, a German doctor is presenting the vaccination certificate that Berlin will issue.

Vanunu underlines that over the last months there has been heightened scrutiny of COVID-19 vaccination certificates because in many countries they secure free movement and certain privileges.

Aside from the dark web, the trade has expanded in message exchange services, mainly Telegram, which guarantee cryptographic message security and the anonymity of those engaging in a transaction.

Vanunu says that there are two broad categories of prospective buyers.

On the one hand there are vaccine deniers – or simply reluctant people – who want to travel or participate in activities that require a certificate.

On the other hand, there are people who want to be vaccinated but either vaccines are not available in their countries or they have not booked an appointment in a timely manner before their summer vacations.

The most “vulnerable” systems according to the study are the ones that provide manuscript vaccination certificates such as Britain’s NHS, the US CDC, and the Russian health system.