Dior adored Greece in a magical show in Kallimarmaro 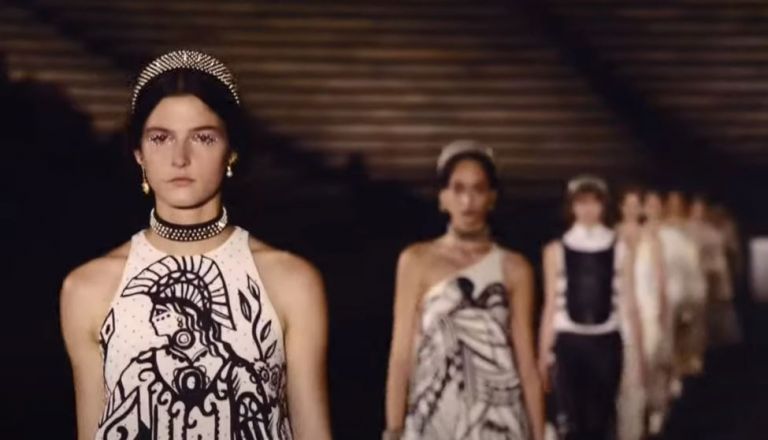 In the cruise collection presented in Kallimarmaro, Dior uniquely combines ancient Greek with futuristic elements and gave us a collection that revives the Olympic spirit in the best way

Dozens of models paraded on Thursday in Kallimarmaro, wearing the creations of the French house Dior. The long-awaited event started as scheduled at 9:30 pm.

Celebrities from the fashion industry were present and rebroadcast the event from their mobile phones. The catwalk consisted only of women who presented the clothes of the Cruise 2022 collection.

The predominant color was white and most of the designs stood out through their simplicity. More eccentric designs were not missing from the fashion show.

Maria Grazia Chiuri known for her feminist stance could not choose another country other than Greece for her collection, a country that has honored women since antiquity.

This year’s cruise collection uniquely combines the ancient Greek elements with futuristic ones and handed us a collection that revives the Olympic spirit in the best way!

The collection was full of beautiful ancient Greek goddess dresses. The ancient Greek dress is Maria Grazia Chiuri’s favorite outfit, not for the femininity it has but for the freedom it gives, and today she adored it with a collection dedicated to it. Today she combined them wonderfully with the Olympic spirit and with her favorite sneakers.

The tone was set by the Symphony Orchestra of the Municipality of Athens, while the impressive catwalk “closed” with sparklers and all the models on the track of the Panathinaikos Stadium.

Dior’s show ended with the models appearing together in the Kallimarmaro for the final catwalk, while Ioanna Gika sang with the accompaniment of strings.

At that moment, the Attic sky was filled with fireworks which marked the end of a fashion festival.

The event was attended by the President of the Republic, Katerina Sakellaropoulou, the PM’s wife Mareva Grabovski-Mitsotaki, the Minister of Culture and Sports Lina Mendoni, the Minister of Tourism Haris Theocharis,  Gianna Angelopoulou and French actress Catherine Deneuve. Among the four hundred guests were internationally renowned models and actors as well as Greek fashion designers.

In the coming days, the house of Dior will take photos at the archeological sites of Herodeion, the Ancient Agora, Nemea, and Sounio. For this event, the house worked closely with Greek archaeologists and the competent local authorities to ensure respect and the full and unconditional preservation of the site.

As the people of the fashion house point out, this unique event further strengthens the valuable and creative ties between Dior and Greece.