Ms. Zacharaki also described what she experienced when she contracted the coronavirus 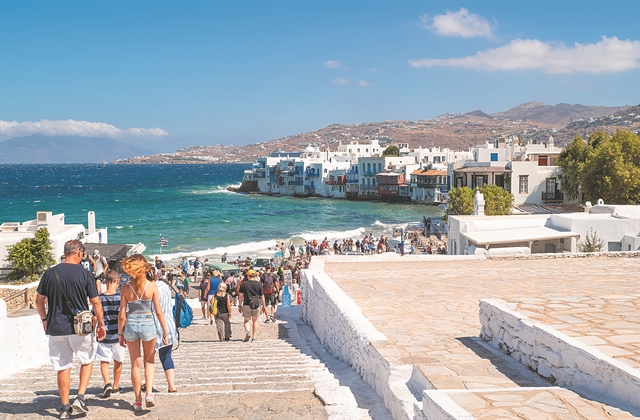 The Deputy Minister of Tourism, Sofia Zacharaki, focused on the markets that Greece targets for tourism, but also ον the need for vaccinations to proceed on the islands, speaking on MEGA tv.

Despite the concern among tourism professionals about bookings or the reluctance of certain markets such as Great Britain, according to Ms. Zacharaki, optimistic messages are coming from France and Germany.

At the same time, she continued, Romanians and Serbs have Greece as their first country of preference for holidays, while the number of tourists from Israel and the USA is increasing. In particular, for the latter, she mentioned that there are ten direct flights daily.

“There is an expectation from Britain because of the mutations that are emerging there. Britain wants to prevent its citizens from traveling. Greece is in the top four in the search in Britain. The point is to be able to facilitate their return. Because when a traveller has a 14-day quarantine, he will think hard about coming here,” noted Ms. Zacharaki. As regards regarding Russia, she underlined that the flights to our country have increased.

“A great effort is being made to make all our islands epidemiologically green,” she said, urging citizens to be vaccinated. “Especially on the islands that depend on tourism. Especially for those who are looking, it is important for them  to know that the immune wall is so high that the other person will not think twice about coming,” she said.

According to Ms. Zacharaki, this year more people are expected to come from more routes. “The digital certificate also helps in the fight against any false certificates. There will also be sampling at the border. We must protect both the local population and those who come, “he commented, saying that in the first ten days of the opening of tourism, 170,000 tourists came to Greece.

On her misadventure with the coronavirus

Finally, she talked about her adventure with Covid 19, as she was diagnosed as positive the day before she was vaccinated. “It’s a lot of hassle, nothing to do with the flu like some people say. It leaves you exhausted.  It left me with a loss of sleep,” she said, adding that she felt short of breath and dizzy during her illness.