As Mitsotakis, Erdogan ‘break the ice’, groundwork is laid for broader bilateral talks 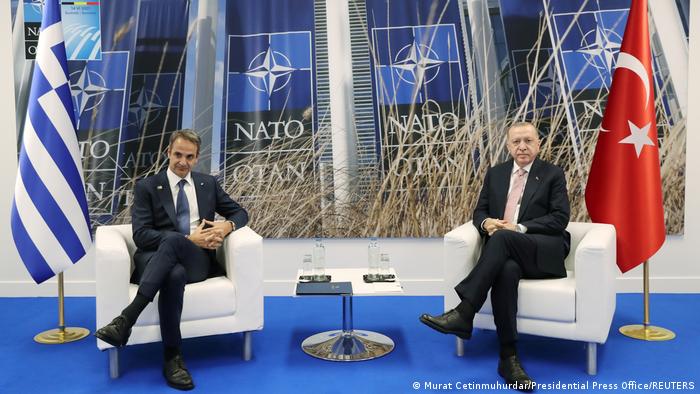 ‘We shall live side-by-side with Turkey, so we must find a way, even when we disagree, to continue talking and managing our differences in a civilised manner,’ the Greek PM said.

Talks between Prime Minister Kyriakos Mitsotakis and Turkish President Recep Tayyip Erdogan were held in a cordial climate today according to diplomatic sources.

The nearly one-hour discussion took place in a warm climate and both sides signalled that the two leaders broke the ice.

Erdogan and Mitsotakis, according to the same sources, agreed to leave behind the tensions of 2020, despite very serious lingering differences.

The basic message of the meeting they say is that there was mutual understanding, that the tensions of 2020 must not be repeated, and that provocations must not become unmanageable.

The desire was expressed to push forward positive measures on the agenda that have been agreed upon, despite the fact that there are huge differences on a variety of issues, chief among which is delimitation of the two countries’ maritime zones in the Aegean and the Eastern Mediterranean.

The Greek side stressed that differences must be handled through existing channels such as bilateral exploratory talks, confidence-building measures, and political consultations.

The two leaders reportedly discussed the migration-refugee issue and the Greek side underlined that the two countries can cooperate as long as the type of provocations we saw in March, 2020, are avoided.

In this framework, a welcome good-will gesture from Ankara would be to accept the return to Turkey of 1,450 individuals whose asylum [international protection] applications have been definitively rejected.

Shortly before meeting Mitsotakis, Erdogan staged a charm attack toward Greece, declaring that the re-opening of channels of dialogue helped resolve certain issues and contributed to regional stability.

Mitsotakis declared yesterday that the “important difference” between the two countries is the delimitation of maritime zones (EEZs). He stressed that both countries are NATO members and should be able to peacefully resolve their differences.

Asked what he will seek from Mr. Erdogan, Mr. Mitsotakis said:

“It is no secret that we have great differences with Turkey and the biggest is the delimitation of our maritime zones. The issue has been pending for many decades. We must find a way to manage our differences without resorting to an escalation of tensions and avoiding what happened last summer,” the PM said.

“I believe that for this to happen we must agree on a joint framework, which must be respect for the provisions of international law and naturally good neighbourly relations. We shall live side-by-side with Turkey, so we must find a way, even when we disagree, to continue talking and managing our differences in a civilised manner.”

The bilateral talks were held against the backdrop of the NATO Summit in Brussels and the Alliance’s framework for Greek-Turkish relations. NATO’s aim is to continue the recent de-escalation.

“We are both members of the [NATO] Alliance and of course when we have differences they must be resolved peacefully because if the path of tension is chosen, that is not good for the Alliance overall,” Mitsotakis said.