Çavuşoglu is “flirting” with the French and Erdogan with Biden

Diplomatic marathon from Turkey, trying to prove that it is not the tlocal bully, but a “good guy”. Barrage of initiatives from Ankara in June, on many fronts. 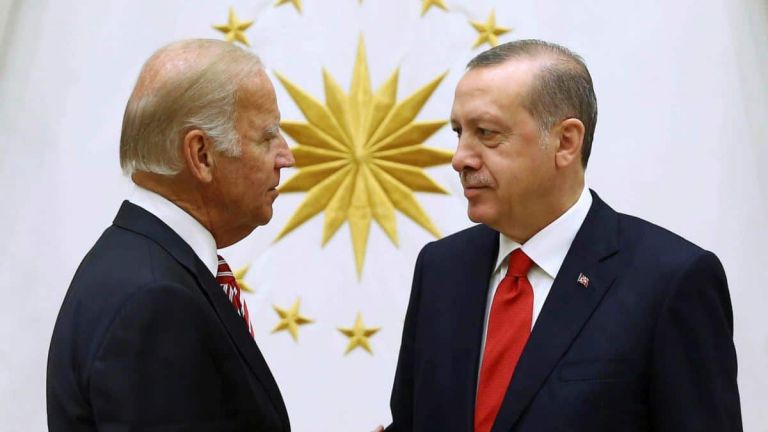 Mevlüt Çavuşoglu’s presence in Paris and his meeting today with his counterpart, French Foreign Minister Jean-Yves Le Drian, is not an isolated event or a bolt out of the blue. After all, Ankara knows that if it manages to reconnect with the French, it will remove the most important “thorn” in its relations with the EU as a whole. Of course, this is not a simple matter. Apart from the bad personal relations between Tayyip Erdogan and Emanuel Macron (these can be overlooked if deemed necessary and useful for both), it is obvious that the two countries have a lot of differences. Their interests, in other words, are competitive on a number of fronts – from Libya and the Caucasus, to NATO and the southeastern Mediterranean.

However, regardless of the outcome of this latest flirtation with France, the truth is that Tayyip Erdogan’s Turkey at the moment looks like a misunderstood lover, who is trying to convince all his relations that he deserves better treatment. To show, in other words, that he is a good boy and not the bullying agitator of the region – hoping, at the same time, that Turkey’s economy will endure and not be found going over the cliff.

Meeting with Biden is the “Key”

This is the reason why the “openings” concern not only France, but many more actors: the United States, Egypt, and even Greece. They unfold through a barrage of diplomatic initiatives and contacts, which are expected to culminate in June.

The “key” in this process is undoubtedly the United States, as Erdogan knows that if he does not secure their consent or, at least, their tolerance, he can achieve little and risk losing much. Objectively, then, his meeting with Joe Biden, on the sidelines of the NATO summit on June 14, is of the utmost importance.

Three Greeks in the Antalya forum The marathon does not end there, however. A few days later, for the sake of truth, that is, on June 18-20, Turkey organizes a diplomatic forum in Antalya to which it attaches great importance, as it wants to capture its prestige and influence.

Libya and the Balkans

Shortly afterwards, on June 23, Turkey will take part in the second conference on Libya, which is being held in Berlin. Having secured its leading role in the country, it will try to place its client – elites in the best possible position – while at the same time, several Turkish media constantly highlight the fact that Greece has not been invited to the conference. At the same time, often without fanfare, openings are noted elsewhere, with particular attention being shown to the Balkans, as shown by Erdogan’s recent meetings with Eddie Rama and Zoran Zaev. After all, there are many countries in the region that have important historical, religious, and national ties with Turkey, and Erdogan wants to be sure that he will be in the first place in case the “rumors” and the plans on paper take shape.

Although not officially accepted, the issues of border change and overall arrangements are open.