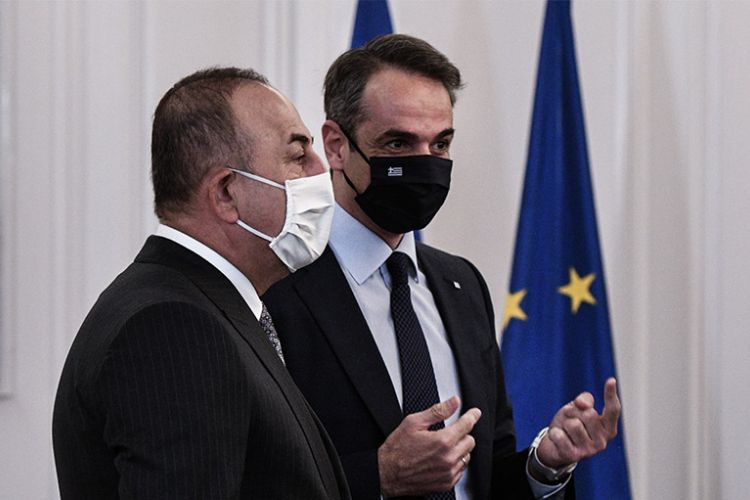 The bilateral negotiations process is intimately connected with EU-Turkey relations and Ankara by all accounts hopes to be remunerated for its good behaviour.

«As two neighbors, we are destined to live in the same geography. Therefore, we should define our relationship with cooperation rather than conflict. It is in our hands to determine our destiny and the way forward,» Turkish Foreign Minister Mevlut Cavusoglu declared on the eve of his talks today with Prime Minister Kyriakos Mitsotakis and Foreign Minister Nikos Dendias.

Though both sides have said the same innumerable times, it is indeed the essential backdrop of efforts to resolve bilateral issues and the confirmation of a 14 June meeting between Mitsotakis and Turkish President Recep Tayyip Erdogan suggests that both sides feel they have an interest in making this happen.

The main obstacle to an understanding has been the fact that over the decades Ankara has vastly expanded its claims against Greece, ranging from territorial claims such as the Imia islets to Turkey’s vigorous efforts to encroach on Greece’s (and Cyprus’) Exclusive Economic Zone, most recently with the illegal delimitation of the EEZs of Libya and Turkey, which do not even border each other.

Cavusoglu’s insistence that there must be no preconditions in bilateral talks makes clear that the Turkish side intends to pile up all its demands on the table, including the Muslim minority in Thrace, demilitarisation of Aegean islands, EEZ delimitation, airspace and territorial waters, and a two-state solution of the Cyprus problem.

Cavusoglu in an exclusive interview with To Vima left open the prospect of Greece and Turkey referring their differences to the International Court of Justice and stresses that this presupposes sweeping bilateral talks to pinpoint the issues that the Court would adjudicate.

The bilateral negotiations process is intimately connected with EU-Turkey relations and Ankara by all accounts hopes to be remunerated for its good behaviour with an updating of the customs union which Turkey seeks with the EU to expand significantly, as Cavusoglu said in his interview.

Greece’s support in pursuing this aim is clearly part of the Greece-Turkey and EU-Turkey roadmap, just as Greece was the most ardent supporter of Turkey’s EU accession, when that still seemed a realistic prospect.

It was Greece’s approval at the 1999 Helsinki EU summit of Ankara’s application that opened the way to Turkey’s accession talks and also was critical in engineering Cyprus’ admission to the EU in 2004.

In joint statements with Cavusoglu, Dendias said that talks covered the entire gamut of bilateral relations and EU-Turkey relations.

“We are fully aware of the different – and on a number of especially serious issues diametrically different – positions that we and Turkey have. The aim of today’s meeting was to achieve an initial understanding and if possible to normalise relations in the long term,” Dendias said with characteristic guarded optimism.

Dendias said that he and his Turkish counterpart agreed on a limited list of programmes for economic cooperation.

He also announced that Greece and Turkey agreed to accept each other’s COVID-19 certificate so that citizens who are vaccinated or have a negative recent test can visit the other country.