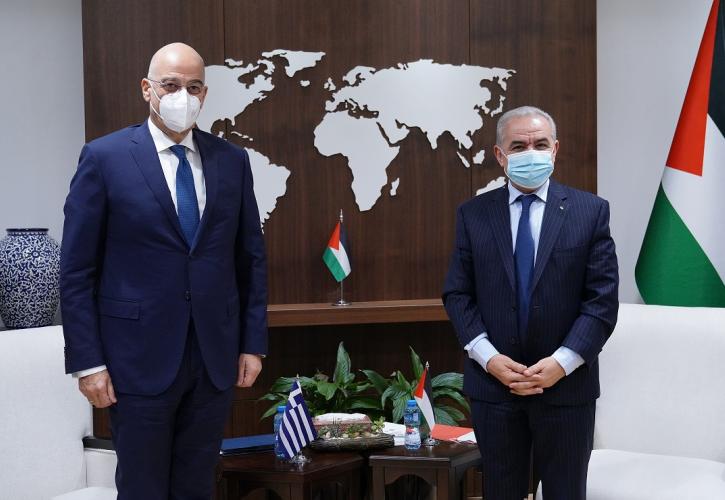 The Greek foreign minister criticised Turkey’s stance toward the conflict stressing that, “inflammatory remarks and unilateral positions” do not help the quest for a solution.

Foreign Minister Nikos Dendias called for an emergency international Middle East peace initiative while on a visit to Israel and the Palestinian territories today, and he participated immediately thereafter in a teleconference between EU foreign ministers focusing on the raging problem.

He condemned Hamas and supported Israel’s right to defend itself.

Dendias told journalists that an immediate ceasefire is needed and that the resolution of Israeli-Palestinian conflict must be based on UN Security Council resolutions calling for “two states with the 1967 borders with Jerusalem as the capital of both states.

Meanwhile, the Greek foreign minister criticised Turkey’s stance toward the conflict stressing that, “inflammatory remarks and unilateral positions” do not help the quest for a solution.

Mr. Dendias’ full remarks to journalists are as follows:

“I met today in Jerusalem with Patriarch Theophilos of Jerusalem in order to state clearly the interest of the Greek government and of Prime Minister Kyriakos Mitsotakis personally in the Greek Orthodox Patriarchate of Jerusalem, which is one of the most sacred institutions of Christendom.”

“Immediately thereafter, I met with my Israeli counterpart, Gabi Ashkenazi, and I went to Ramallah where I met with Palestinian Prime Minister Mohammad Shtayyeh. After these meetings I briefed via teleconference the Council of EU foreign ministers on the talks. I shall shortly be leaving for Amman, Jordan for talks with my colleague Ayman Safadi.”

Welcome my friend, Greek FM @NikosDendias. I am very pleased that you have chosen to visit as a message of solidarity & further evidence of our close relationship. I thank you & the people of #Greece for supporting our right to ensure peace & security for the citizens of #Israel.