The timing of the next round of talks is not coincidental as EU leaders in December agreed to revisit the prospect of sanctions against Turkey at their March summit. 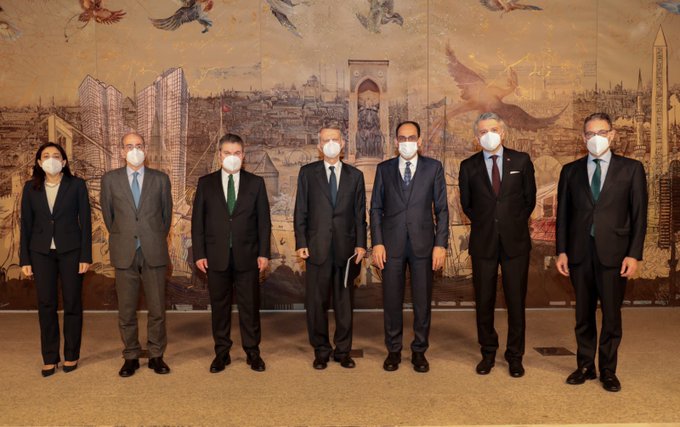 Diplomatic delegations in Greece and Ankara met for three hours today in Ankara to launch exploratory talks on bilateral issues.

It was the 61st round of such talks, which commenced in 2002, when George Papandreou was foreign minister, and were abruptly terminated in 2016 after an abortive coup against Turkish President Recep Tayyip Erdogan in 2016.

As expected, the first meeting began with basic disagreements on the agenda for prospective negotiations as Athens insists that the sole topic to be discussed is the delimitation of the two countries’ Exclusive Economic Zones and of the continental shelf while Turkey laid out a lengthy and longstanding list of claims including the demilitarisation of Aegean islands near the Turkish coast.

The aim of the talks is to find enough common ground to launch full-fledged negotiations.

In an apparent signal that he views the resumption of talks as a priority on his agenda, Erdogan dispatched top advisor Ibrahim Kalin to participate along with diplomats in the Turkish delegation.

Kalin in a tweet after the meeting stated that, “It is possible to solve all problems, including the Aegean, and we have a will for this. Regional peace and stability is in everyone’s interest.”

Both the EU and the US in statements welcomed the resumption of talks.

The two sides agreed to hold the next round of talks in Athens, most likely in March.

The timing is not coincidental as EU leaders in December agreed to revisit the prospect of sanctions against Turkey at their March summit.

Aside from the encroachment on member states’ (Greece and Cyprus) sovereign rights in the Eastern Mediterranean, the EU has expressed consternation over a Turkey-Libya agreement delimiting the two countries EEZs in a manner that violates international law, gives Turkey a large chunk of Greece’s EEZ, and gives Turkey an exceedingly large role in the Eastern Mediterranean. The EU has also strongly opposed Ankara’s move to send troops and military aid to the government in Tripoli.

The talks come straight on the heels of nearly a year of Turkish provocations toward Greece including a major effort to push thousands of migrants across the Greek-Turkish land border in the Evros region and the intense activity of an oil and gas exploration vessel, the “Oruc Reis”, and Turkish Navy vessels in areas that fall in Greece’s EEZ or even continental shelf.

Ankara pulled back the exploration vessel just two months ago and has suggested that if it cannot satisfy its claims in bilateral talks it will pursue them on the ground.

For Turkey the talks also aim to send a strong signal to the EU, which has threatened sanctions if Turkey does not cease provocations, and to the incoming Biden administration in the US, that Ankara wants to resolve differences with Athens.

For Greece, where many analysts have said that as in previous rounds of exploratory talks these will essentially be a string of “parallel monologues”, an optimal outcome would be to refer the EEZ and continental shelf issue to the International Court of Justice in the Hague.

That, however, requires a bilateral agreement or compromise on what issues will be referred to the court. Turkey for years steadfastly rejected such an eventuality, though one official last year suggested that Ankara may entertain such a move if the compromise included a range of Ankara’s claims.