On the latest developments in the Eastern Mediterranean, Dendias declared that ‘despite the relative calm in the past few weeks, the situation remains very volatile’. 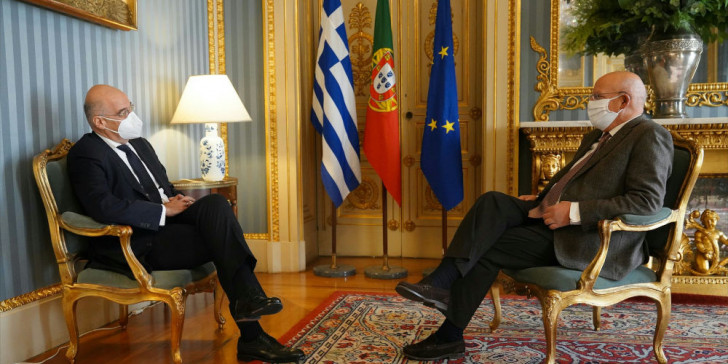 The priorities of the Portuguese EU presidency which commenced on 1 January, the upcoming Greek-Turkish exploratory talks, developments in the Eastern Mediterranean and the migration crisis were the focus of talks in Lisbon today between Foreign Affairs Minister Nikos Dendias and his Portuguese counterpart Augusto Santos Silva.

On the latest developments in the Eastern Mediterranean, Dendias declared that «despite the relative calm in the past few weeks, the situation remains very volatile.» He further reiterated that «Greece is always ready and willing to engage in a constructive dialogue with Turkey, but of course on the basis of International Law, and in order to discuss that single issue that needs to be addressed, the delimitation of Exclusive Economic Zone and the continental shelf in the Aegean and the Eastern Mediterranean.»

«Following an invitation by the Turkish side, it has been agreed that we are going to have the next round of the exploratory talks in Istanbul on the 25th of January.» He also cited the December 2020 European Council conclusions, which «called not just for a sustained de-escalation for the resumption of these exploratory talks, but also for a smooth continuation.» Greece, he said, «[looks] forward to a constructive attitude from Turkey and to the abstention from any provocation from their side.»

Finally, Dendias commended Silva on his country’s stance on the migration crisis, for accepting the relocation of refugees on its territory, and for contributing to the protection of the European Union’s external borders through Frontex, the EU’s borders agency.