The talks began in 2002, when Pasok’s Costas Simitis was PM and were abruptly cut off after the failed coup attempt against Recep Tayyip Erdogan in July, 2016. 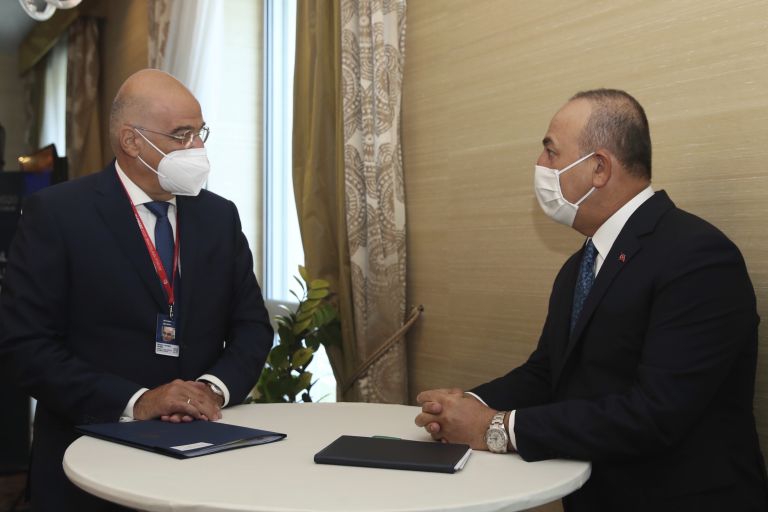 Greek Foreign Minister Nikos Dendias, left, meets with Turkey's Foreign Minister Mevlut Cavusoglu, on the sidelines of a conference in Bratislava, Slovakia, Thursday, Oct. 8, 2020. Greek and Turkish officials say the ministers agreed to set a date for the start of a new round of exploratory talks between the two. A dispute between the two NATO allies and longtime rivals over maritime boundaries in the eastern Mediterranean this summer led to fears of open conflict as warships from both sides faced off. (Fatih Aktas/Turkish Foreign Ministry via AP, Pool)
Share

After a year of Turkish threats to Greek sovereignty on land, at the Evros border region, and at sea, in the Aegean and Eastern Mediterranean, the Greek foreign ministry in a curt statement announced that the 61st round of Greek-Turkish «exploratory talks» will begin on 25 January in Istanbul.

The meeting was set amidst strong international pressures and following the invitation of Turkish Foreign Minister Melut Cavusoglu.

Greek analysts have underlined that one of Ankara’s key motivations in pursuing dialogue now after many months of denial and provocations is that the December EU summit decided that it wil again review the prospect of sanctions against Turkey at the 25 March, 2021 EU summit.

Under the current circumstances, however, following the dangerous summer flare ups in the Mediterranean which are widely acknowledged as a serious threat to peace in a geopolitically critical region, there will be stiff international pressure for a wider-ranging dialogue that will put a number of Turkey’s demands on the table with a view to negotiating certain Greek sovereign rights.

There, a critical objetive of both sides in the quite conceivable event of a deadlock or even breakdown of talks will be to avoid being held accountable, at least exclusively, in a resulting blame game.

The talks began in 2002, when Pasok’s Costas Simitis was PM and George Papandreou was foreign minister, and were abruptly cut off after the failed coup attempt against Recep Tayyip Erdogan in July, 2016.

Papandreou was able to commence the dialogue, after a long chill in relations following the 1996 Imia crisis that led the two countries to the brink of war, in a process that became known as «earthquake diplomacy» due to the Greece’s decision to send immediate, crucial aid and assistance to Turkey after a disastrous 1999 earthquake.

Though both sides have long declared publicly that they wish to resume talks, their views on the agenda and limits of such a dialogue are diametrically opposed and that, many observers in Greece believe, does not bode well for the outcome of this latest effort.

Athens for decades has steadfastly insisted that the delimitation of the two countries’ maritime boundaries (continental shelf and later Exclusive Economic Zones or EEZs) is the only issue to be resolved, whereas Turkey has for at least a quarter century tabled a large and constantly growing list of claims that effectively seek to limit Greece’s sovereign rights, even to the point of claiming sovereignty over dozes of Greek Aegean islets and rock islets

Whereas Greece has for decades proposed referring any dispute to the International Court of Justice in the Hague, Ankara has steadfastly refused. That would involve both sides signing a compromis on what issue or issues will be submitted to the court for adjudication and Athens rejects Ankara’s long wish list.

Ankara’s demands include demilitarisation of the Aegean islands, shrinking Athens’ airspace and territorial waters as they are currently determined by international law, and the co-exploitation of the oil and gas resources in Greece’s EEZ.

After a thwarted attempt to send thousands of migrants into Greece from the Evros Greek-Turkish border region early last year, Ankara has for many months pursued a form of brinkmanship and gunboat diplomacy, sending oil and gas exploration ships into the EEZs of Greece and Cyprus and confronting Greek vessels with Turkish Navy and Coast Guard ships, repeatedly coming within a hair’s breadth of an accident that could easily have led to a military clash.

The cost of the bilateral tensions in term of defence spending has been estimated in some reports at around 100mn euros, leading analysts to suggest that bleeding the Greek economy through military provocations is Ankara’s latest stratagem in its effort to force Greece to cave in to its demands.

Both sides have long been under pressure from both Washington and Brussels to hold sweeping negotiations that would place many of Ankara’s demands on the Agenda.

Despite feverish and stubborn efforts by the German EU presidency that concluded on 31 December there was. , much to Berlin’s consternation, no progress due to the fact that each attempt wa scuppered b Ankara’s moves to ratchet up the pressure on Greece militarily.

Prime Minister Kyriakos Mitsotakis repeadtedly stated all the while that he was prepared to begin exploratory talks but not at gunpoint and under external pressure as long as Ankara’s provocations continued.

Five dozen rounds of talks in nearly 20 years proved fruitless as Athens steadfastly rejected all of Ankara’s demands that are outside the parameters of international law.

Turkey has not signed the UN’s 1982 Law of the Sea Convention (Montego Bay) which deermines the manner and terms under which sea boundaries are delimited internationally.