Editorial: In defence of reason 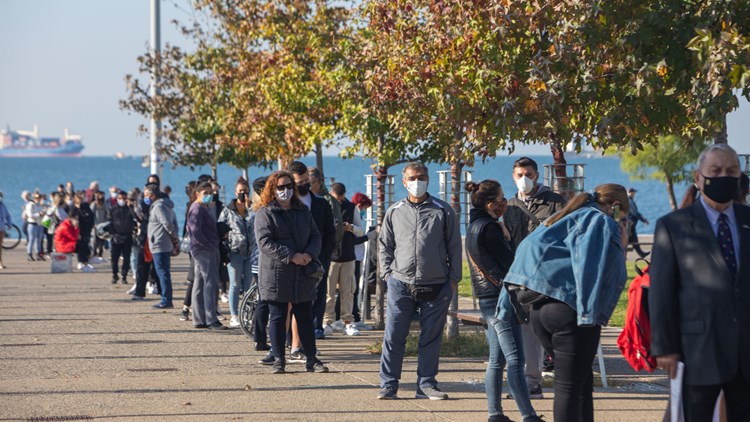 There is no longer any room whatsoever for groundless disputes and unfounded conspiracy theories. The danger is crystal clear. The virus is everywhere. It lurks among us and no one is invincible

Months ago it had been stressed that in autumn and even more so in the winter we would face a second wave of the COVID-19 pandemic that would test the endurance of the National Health System and by extension of the Greek economy and society.

Since summer epidemiologists and virologists warned that the virus remains active and is ready to spread under conditions with large gatherings of people or crowding.

That is why there were constant calls for the public during summer travel to comply with public health measures – social distancing, the use of masks, and the frequent cleaning hands with soap or antiseptics.

The truth be told, in the summer there was a need to strike a difficuly balance between the need to temper the dire economic repercussions of the pandemic and the need for strict enforcement of public health safety rules.

Greece’s successful handling of the first wave of the pandemic last spring limited the concerns of the public.

Most people thought that the worst was behind us and that they could function with greater laxity, a mentality that fueled conspiracy theories in a segment of society about the very existence of COVID-19 and the supposed ulterior motives of unknown persons or forces behind the rapid spread of the virus globally.

The disputes over the need to wear masks in early autumn with the start of the school year were indicative of a climate in which the pandemic and the grave dangers that it poses were greatly underestimated.

Nonetheless, with the images of crowding and laxity in summer vacation resorts experts had no doubt either about the advent of a second wave or about the results of such reckless behaviour.

The great rise in the number of cases in recent days and the spread of the virus throughout the country simply confirmed the validity of those warnings.

Now with an ever greater number of people falling ill, with packed hospitals, and with the death of at least 10 of our fellow citizens daily no one doubts the weight and intensity of the crisis.

The kilometres-long queues on the seafront of the northern port city of Thessaloniki (Greece’s second most heavily populated, photo) of citizens waiting for free COVID-19 rapid tests indicate the intense alarm and cognisance of the threat.

There is no longer any room whatsoever for groundless disputes and unfounded conspiracy theories.

The danger is crystal clear. The virus is everywhere. It lurks among us and no one is invincible.

We must all now rise to the occasion and exhibit personal and collective discipline so as not to overload the National Health System and so as to save as many lives as possible.

It has been proven globally that there are no costless solutions or magical prescriptions.

Wherever we saw reduced attention paid to the dangers and the lack of basic compliance with public health regulations the pandemic struck with a vengeance, multiplying the death count.

Moreover, in countries where human lives were sacrificed for the sake of the economy one did not see the desired results. Their economies were not saved due to the interdependence and interconnectedness of everything and the desired immunity was not achieved.

There is no longer any doubt that handling the public health crisis requires limitations on movement, controlled contacts, and strict adherence to public health measures.

That means that citizens, society as a whole and the country must exhibit patience in the coming difficult months even as we await the discovery of vaccines and medicines.

Right now the international scientific community is coordinated in a race against time in order to offer the world as rapidly as possible an effective answer to the natural phenomenon that is the pandemic.

There are encouraging signs and well-founded expectations.

Now is not the time for sterile struggles, flaky attitudes, and senseless behaviour.

Only rationalism can save us.