The earthquake lasted about 15 seconds and was recorded at 13:51 in the sea region 16 km north-northwest of Samos, the Geodynamic Institute of the National Observatory of Athens said. 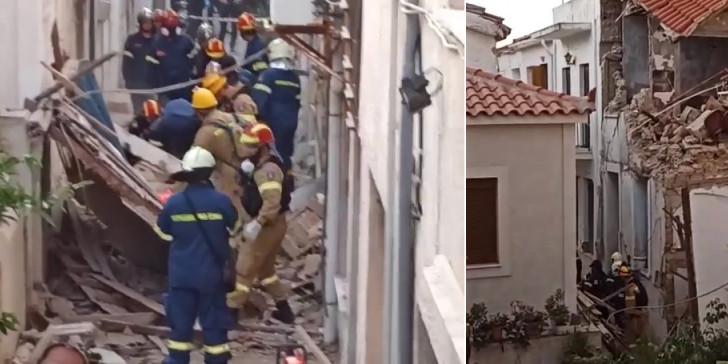 Two high school students  were killed this afternoon on the island of Samos when a wall collapsed upon them in a strong earthquake measuring 6.7 one on the Richter scale.

The two were returning home from school and were crushed by a wall that collapsed on a narrow street.

The temblor had a devastating impact on the Turkish coastal city of Izmir where the death toll so far stood at ten.

The earthquake lasted about 15 seconds and was recorded at 13:51 in the sea region 16 km north-northwest of Samos, the Geodynamic Institute of the National Observatory of Athens said.

There has been damage to buildings on the island of Samos as a result of the strong quake, while communications with the island have been seriously impeded.

The temblor was felt from Crete to Athens and from the Aegean isands to Thessaly.

On Samos five people were taken to hospital with minor orthopedic problems and five more were taken to the island’s primary Healthcare Centre and were treated and released.

.There has been damage to buildings on the island of Samos while communications with the island have been seriously impeded.

Damage to buildings has been also reported in southern areas of the island of Chios, while no damage has so far been reported on Lesvos.

According to initial information from the region of South Aegean, no damages have been reported on any of the Dodecanese or the Cyclades islands.

The depth of the earthquake was estimated to be 2 km and was felt throughout Greece,

Health Minister Vassilis Kikilias said that all hospitals, health centres and emergency aid centres on Samos and Ikaria have been put on full alert in the wake of the strong earthquake that shook the region.

Deputy Civil Protection Minister Nikos Hardalias traveled to Samos to be briefed on the impact on the region and coordinate the actions of the state mechanism, which has been placed on full alert to deal with the damages and to set down measures to handle possible major aftershocks.

The Civil Protection service has warned the citizens of the islands near Samos to avoid going near buildings at risk of collapse and to stay outdoors in open, safe spaces, to avoid making non-essential phone calls and to follow the instructions from authorities.
The airport of Samos reopened in the afternoon and the general secretary of the infrastructure and transport ministry, Yorgos Karagiannis, and a team of civil engineers will assess the damage to the island’s infrastructure.