Miltiadis Marinakis Endowed Professorship: A bridge between Greece and the US 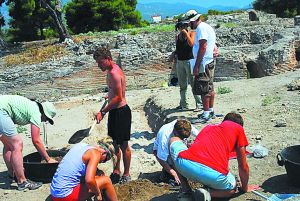 Next fall will not be the same for Ohio State University (OSU) as with previous academic years. This will not be the result only of the pandemic and the way it forces adjustments in our behaviour and our way of life. At this exact juncture a major change will occur whose impact can be felt as far as Greece. During the fall semester at Ohio State University the first professor holding the Miltiadis Marinakis Endowed Professorship of Modern Greek Language and Culture is expected to start teaching, occupying a Chair named in honour of the father of Greek ship-owner and businessman Evangelos Marinakis.

A concerted effort for the past five years made this possible. The local Greek American Community and the ‘Ohio Hellenic Paideia’ Project, with Evangelos Marinakis as the major sponsor, started and completed during the period 2015-2020 a fundraising effort in order to secure the continuation of the existence of a department that was facing the risk of closure. Greek language will continue to echo in the classrooms, since the Board of Trustees of Ohio State University officially announced the establishment of the ‘Miltiadis Marinakis Endowed Professorship of Modern Greek Language and Culture’ on June 2020.

Fifty years later Evangelos Marinakis sends a message with a broader appeal, by naming this Endowed Professorship in the memory of his father, who inspired in him love towards his fellow human beings and a sense of duty in regards to Greek tradition and culture.

A bridge between the USA and Greece

The Modern Greek Program of Ohio State University forms one side of an imaginary bridge that reaches as far as Greece. On one side of the Atlantic world-class scholars teach Greek language, culture, but also ethnography, history and literature. Apart from their teaching and research projects they work closely with the local community and often travel abroad to strengthen the ties of their students with Greece.

This is exemplified in the fact that for almost forty years both undergraduate and postgraduate OSU students have participated in archaeological projects in Greece, sponsored by the Department of History under the direction of Professor Timothy Gregory and his wife and coordinator of the project Lita Tzortzopoulou-Gregory. Two such projects are the excavations at Isthmia in Korinth and the Australian Paliochora-Kythera Archaeological Survey (APKAS), which also includes the Karavas Water Project at Karavas a small village in northern Kythera.

The excavations of Ohio State University at Isthmia started as an initiative of the American School of Classical Studies in Athens and are being conducted with authorisation from the Greek Ministry of Culture. The project follows upon the work of Oscar Broneer of the University of Chicago between 1952 and 1967 and is the continuation of the excavation and research by Paul A. Clement of UCLA. Professor Timothy Gregory became the director of the project in 1987 and Ohio State University undertook sponsorship of the excavation.

According to Lita Tzortzopoulou-Gregory, also Executive Officer of the Athens Branch of the Australian Archaeological Institute at Athens: “the state of Ohio program is managing the excavation records since 1967 and is responsible for the preservation and protection of the findings of the excavation and also for making them available for further study to researchers from OSU and other institutions. In fact, the Isthmia excavation has been an invaluable source for the Ohio State University which has helped us create a strong Ancient History Program and has provided a site to train undergraduate and graduate students in history, many of whom have moved on to prestigious university posts all over the US.’

THE RESEARCH AT KYTHERA

The Australian Paliochora-Kythera Archaeological Survey (APKAS) is a project of the Australian Archaeological Institute in Athens in collaboration with OSU and the University of Sydney. This project is based on a landscape approach to the history and archaeology of the northern part of the Island of Kythera, using the archaeological field survey as the main research method, which is different from an excavation. The Karavas Water Project (KWP) is an environmental, topographical and historical study of the water resources and their storage and use in the northern part of Kythera, from prehistory to the modern era.

Since 1983 and almost every year until 2016 students from Ohio State University have had a unique opportunity to study abroad at Isthmia and from 1999 until 2016 students have taken part in archaeological projects at the island of Kythera including APKAS and KWP. Lita Tzortzopoulou-Gregory continues her presentation of the projects: “The students who participate are dedicated History students and other undergraduate students who want to use this experience to have a different approach to the world they live in. During these years these projects offered a unique opportunity to students to live in small Greek villages, to observe local life and get to know local communities, while at the same time learning about detailed archaeological work and this study has rewarded them with amazing knowledge about the world of people who lived hundreds or thousand years ago. Many of the students have pursued academic careers, but most of them went on to excel in agriculture, business and professions that cover different sectors of the labour force. One of the things that our students have always been telling us is how the rigorous program, the high standards and the manual labour necessary for success in the OSU archaeological excavations in Greece have helped them to deal with difficulties and obstacles that they inevitable face in their lives after the completion of their studies at OSU”.