Mitsotakis: No mention of funding research big bang at talks with National Council for Research 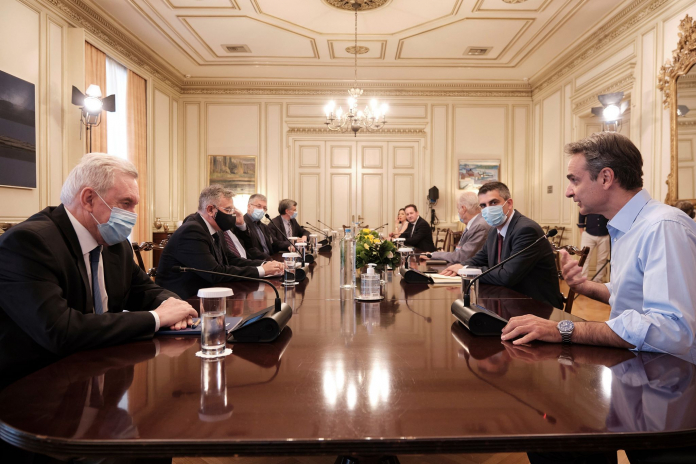 Just one month after they submitted a proposal to the PM, members of the the National Council on Research, Technology, and Innovation briefed Kyriakos Mitsotakis today on how they propose the objects of their remit be handled.

“As a country we are not only an example of a successful management of the pandemic. Greece has made a global contribution on the research front as well,” Mitsotakis told the gathered academics, some of whom are involved in researching antibodies that can help in the diagnosis and treatment of Sars-CoV-2 as Covid-19 is more formally referred to.

The president of the Council, Manolis Derrmitzakis has called for major funding for research in a spate of interviews in which he also criticises the one-sided governmental emphasis on start-ups.

The PM was briefed on the progress of the Council’s tasks which he said were advancing more rapidly than planned and on the bureacucratic red tape that the Council says must be cut in a number of areas so as to better contribute internationally to the handling of the public health crisis.

The aforementioned study is being conducted by a consortium of institutions including Athens University’s Medical School, the Foundation for Biomedical Research of the Academy of Athens, the National Centre for Research and Technological Development, the Foundation for Technology and Research, The “Dimokritos” National Centre for Natural Sciences, the “Alexander Fleming” Biomedical Research Centre, the Pasteur Institute, and all Covid-19 referral points (hospitals, health centres) nationwide.

The composition of the Council

The members of the Council attending included Professor of Genetics (University of Geneva Medical School) and president of the National Council on Research, Technology, and Innovation Manolis Dermitzakism, Histology Professor Vasilis Gorgoulis (Athens University Medical School), Dr. Dimitris Thanos (Chairman of the Scientific Board at the Biomedical Research Foundation of the Academy of Athens, Adjunct Associate Professor in the Department of Biochemistry and Molecular Biophysics at the College of Physicians & Surgeons of Columbia University), Kostas Stamatopoulos (National Centre for Research and Technology Development – Institute of Applied Biomedicine), Professor Sotiris Tsiodras, (Fourth University Pathology Clinic at Attikon General Hospital, and Professor of Medicine Christos Kittas (former rector, University of Athens).