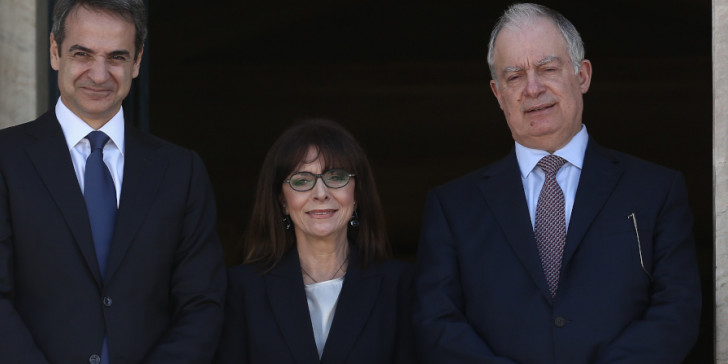 Sakellaropoulou said that the country’s objective is «to ward off new dangers, to prevent new threats without stopping the struggle for social and economic reconstruction and without discounts in the functioning of democratic government and the rule of law,

Katerina Sakellaropoulos was sworn in today as president of the Hellenic Republic.

As president she has a largely ceremonial role and is required to sign executive order drafted by the government, but the weight of the office consists in the president’s role as a focal point of national unity at a moment when Greeks are exceptionally concerned about multiple vital threats.

She is also a great fan of US Supreme Court Justice Rith Bader Ginsberg, whose image graced a mug on her Council of State office desk.

Sakellaropoulos is a assuming office even as Greece is struggling with three major battles – managing the coronavirus pandemic, dealing with Turkey’s bellicose actions in the Evros border region and the Aegean, and re-staring the Greek economy with domestic and foreign direct investment.

In accord with the Constitution Sakellaropoulou took a religious oath of office which was administered by Archbishop Ieronymos of Greece, who has been grappling with how much to restrict services and the offering of Holy Communion.

The incoming president touched upon the major challenges that Greece is and will be dealing with during her five-year term of office.

Sakellaropoulou praised outgoing president Prokopis Pavlopoulos’ dexterous handling of intense crisis-era political battles and particularly his diplomatic moves to avert a Grexit in July, 2015, when then PM Alexis Tsipras called a disastrous referendum on whether to accept Greece’s new bailout deal offered by creditors. Over 60 percent followed the government’s rejection of the deal offered by Greece’s creditors, only to ignore the outcome and sign the EU bailout memorandum in order to keep Greece in the eurozone and EU.

Sakellaropoulou stressed that the management of all three crises must be in accord with the rule of law and with respect for the unhindered operation of democratic institutions.

She said that the country’s objective is «to ward off new dangers, to prevent new threats without stopping the struggle for its social and economic reconstruction and without discounts in the functioning of democratic government and the rule of law, which are the foundations of our social existence and the guide to our common way of life.»

«We will make our way to a future of prosperity that has room for us all, a future that, inspired by the European vision, is linked to a new patriotism, which does not oppose cosmopolitanism but is a condition for it.» She also expressed her conviction that all the democratic political forces of the country, the institutions and the citizens will defend themselves «creatively, decisively and in a spirit of national understanding,” Sakellaropoulou declared.

In a thinly veiled reference to Turkey she said that Athens must now deter and fend off the aggression of those who, by using human suffering, are threatening Greece’s national sovereignty,”
.
Migration crisis – standing up for territorial integrity, rights

On the issue of the refugee and migrant crisis triggered by Turkey at it border with Greece – where Ankara is fighting tooth and nail to push tens of thousands of migrants to Greece, using even an EU-funded armoured vehicle to tear down a wire fence Greece set up at its border – the new president described a required delicate balance between the state’s right and duty to protect both sovereignty and territorial integrity on the one hand and on the other its obligation to uphold the individual, international rights of refugees and migrants – “fulfilling our humanitarian duty towards defenceless and desperate people”.

«It is a difficult but not insoluble equation, which requires dedication, thoughtfulness, determination, prudent management and a rigorous mindset,» she added.

Referring to the COVID-19 pandemic, she said,»We are also called upon, first and foremost, to respond promptly and effectively to the recent coronavirus pandemic – so that a real danger, especially for our older fellow citizens, does not spread panic and threaten the collapse of our health system or harm the social fabric – while also dealing a major blow to the country’s economy.»

Sakellaropoulou underlined that «the compliance of the general population to the recommendations of the competent health authorities and strict adherence to preventative measures are an essential requirement for preventing the further transmission of the virus.»

She also expressed hope that the election, for the first time, of a woman to the highest office in the country will serve to improve the position of all women, both in the family and in society.