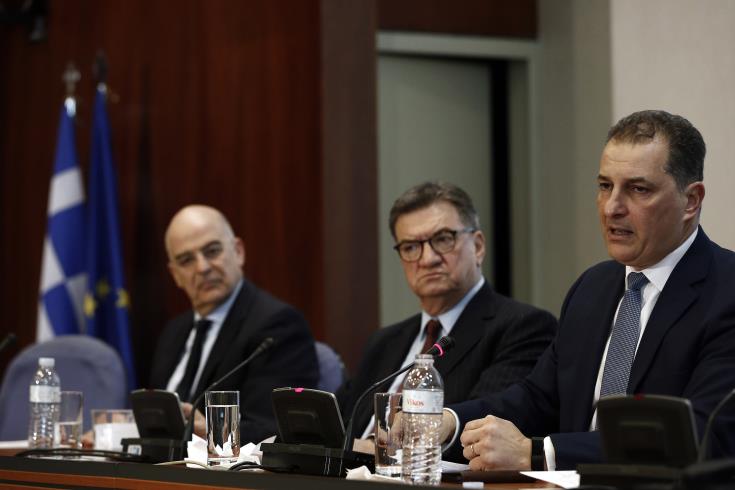 Lakkotrypis said that despite Turkish threats and an invasion of Cyprus’ EEZ Nicosia is continually attracting new companies and promoting its interests.

Αs Turkish President Recep Tayyip was declaring to  members of his AK Party that Greece has resigned itself to Ankara’s geopolitical designs in the Mediterranean, Cyprus’ Energy Minister Georgios Lakkotrypis told an audience at the Greek foreign ministry that his country will move forward with its hydrocarbons drilling plans in its exclusive economic zone.

Energy giants such as ExxonMobil, France’s Total, and Italy’s Eni have all acquired rights in Cyprus’ EEZ.

For his part, Foreign Minister Nikos Dendias vehemently rejected Erdogan’s claims and stressed that Greece will not retreat in defending its sovereign rights.

He said Greece is always prepared to reach an honourable understanding with Turkey but that will never accept a dishonourable and abusive or unfair compromise.

“As we have repeatedly stressed, illegal actions produce no legal effect. Greece, along with the international community rejects and condemns Turkey’s illegal moves in the region which continue to undermine regional peace and security, creating, among other things, pretexts for violation of the arms embargo in Libya and for the attempt to usurp the sovereign rights of countries in the region. Unfortunately, in this, too, Turkey continues to be a minority of one,” the Greek foreign ministry said in a statement.

Lakkotrypis said that despite Turkish threats and an invasion of Cyprus’ EEZ Nicosia is continually attracting new companies and promoting its interests.

“The Eastern Mediterranean could play the role of an alternate energy source and supplies can be routed to the EU. It is from that perspective that we must examine Turkish violations and that is why now geology is inextricably linked to geopolitics. The game and interest is not just about energy sources but also about energy routes,” the minister underlined.

He categorically rejected calls by those who want Turkey to be an equal partner despite its lawless actions and to put Cyprus’ hydrocarbons drilling programme on hold pending a solution of the Cyprus problem.

“If we were to place in the balance the actions of the Republic of Cyprus and Greece, both of which respect international law, on the one hand and the actions of Turkey on the other – if one assumes that it might at some point agree to referring disputes with Cyprus to the International Court of Justice (ICJ), it is clear to whose benefit the scales would be tipped,” Lakkotrypis said, thus raising the prospect of an ICJ case

‘Ankara sees the Mediterranean as a Turkish lake’

“Turkey is attempting through its illegal acts to lead us to mistakes that will allow it to legitimise its lawlessness.

He said all political forces despite their different approaches to handling the new realities in the energy sector should arrive at and unite behind a single national position.

The conference – entitled “Security and Prospects for New Energy Routes in the Eastern Mediterranean” – was organised by the Cultural Foundation of the Athens Dailies Journalists’ Union (ESHEA).

The chairman of the Parliamentary Permanent Committee on Foreign Affairs and Defence, New Democracy MP Kostas Gioulekas, told the gathered audience of diplomats, academics, and experts that the current period of tensions with Turkey is much more protracted than in previous years and that Turkey is laying claims to islets which it had recognised as Greek in maps decades ago.

“In order to ensure peace we must both insist on the enforcement of international law and bolster the deterrent power of the Greek military,” Gioulekas said.

The event was attended also by US Ambassador to Athens Geoffrey Pyatt and Cyprus’ Ambassador Kyriakos Kenevezos.

Pyatt reiterated the US position that islands under international law have a continental shelf.