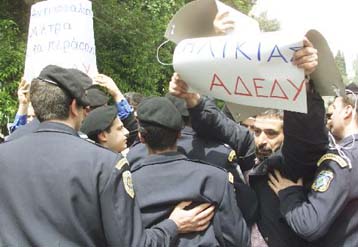 One must not forget the enormous backlash over then labour and social insurance minister (2000-2001) Tasos Giannitsis’ insurance reform plan and its consequences.

Every effort to resolve the problems of Greece’s insurance system was met with the intense opposition of trade unions and opposition parties.

Pressurised by strong social reactions and fearing the political cost successive Greek governments kicked the can down the road and avoided grappling with the issue in a substantial and timely manner.

They made limited and largely secondary changes.

Unable to see the forest for the trees unions attempted every time to preserve their gains.

They did not realise that by opposing every attempt to reform they were gradually preparing the way for a collapse of the system with extremely negative repercussions for those insured.

As a handful of politicians and experts who had the courage to buck public opinion warned over the years the short-sighted approach of unions and governments ineluctably magnified the problem.

The orderly bankruptcy of Greece’s economy is largely due to the inability or refusal of the political system to manage the problems of the insurance system which requires a major structural reform of the national economy.

In this manner successive opportunities for a definitive solution were squandered.

One must not forget the enormous backlash over then labour and social insurance minister (2000-2001) Tasos Giannitsis’ insurance reform plan and its consequences.

If that opportunity had not been lost the course of events certainly would have been different.

Back then, however, Greek were living in a care-free period and did not want anyone to awaken them from a pleasant dream that subsequently became a nightmare.