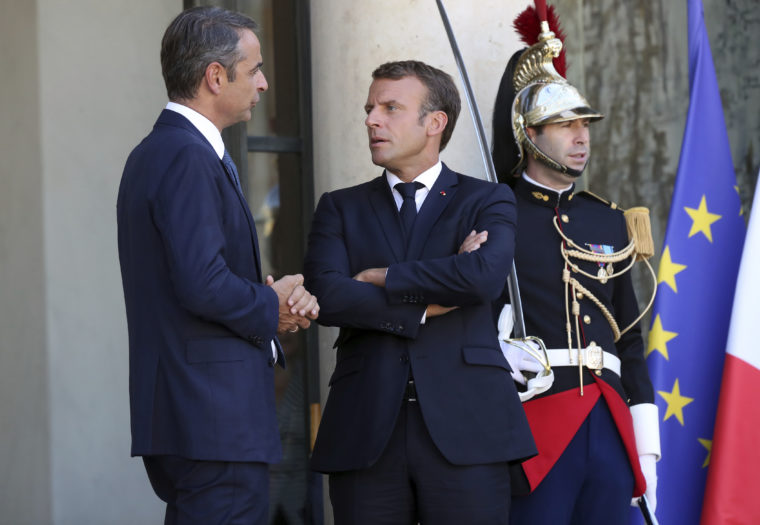 ‘We are talking about an industrial cooperation and joint exercises at sea and on land. We would also like other bordering countries to be involved,’ Macron said.

“France supports Greece and Cyprus as regards respect for their sovereign rights and condemns Turkey’s provocations on this score. We reiterate our concerns. We clearly condemn the Turkey-Libya agreement [delimiting their putative EEZs],” Macron declared.

Macron also announced an agreement between the French and Greek defence ministries. “We are talking about an industrial cooperation and joint exercises at sea and on land. We would also like other bordering countries to be involved.”

Greece has long been negotiating the purchase of two French Bellh@ra intermediate-size frigates and a declaration of intent has been signed, although there are outstanding issues of price and payment schedule as Greece remains in financial dire straits as well as  delivery time, as the Greek Navy must cover  immediate needs and the first ultra-modern frigate is expected to be delivered to the French Navy in 2023.

The meeting was held amidst heightened threats against Athens from Turkey and Macron declared France’s full support for Greece’s sovereign rights at sea and on land, and in particular in the Turkish-Libyan expropriation of a large swathe of Greece’s EEZ around Crete in an MOU which both Greece and France view as a blatant violation of international law.

Though strong international players such as the US and the EU have criticised the MOU it is clear that only France has begun to offer palpable backing at sea in the Mediterranean, beginning with joint military manoeuvres south of the island of Crete.

Talks with CEO of Total

That is where French energy giant Total has secured permission for gas and oil exploration from the Greek government and so the two countries have overlapping interests that conflict directly with Ankara’s expansionist designs and its aim of hegemony in the Eastern Mediterranean.

Mitsotakis’meeting with Total Chairman and CEO Patrick Pouyanne was both quite substantial from the business perspective and highly symbolic, as Athens would like to draw the huge energy company backed up by the powerful French military into the Eastern Mediterranean equation as a bulwark against Turkish aggression.

The discussion focused on hydrocarbon deposits in the EEZs of Greece, Cyprus, and Libya.

France’s objective of establishing a strong, permanent regional presence and influence was apparent in its central involvement in creating the Union for the Mediterranean, which was founded at the 2008 Paris Summit for the Mediterranean, but the current confluence of geopolitical events gives france a potentially much firmer entree.

It should be noted that there is no love lost between Turkey and France, which has been a staunch and vocal opponent of Ankara’s stalled EU course.

Ankara was outraged when France in 2001 was the first European country to recognise the Armenian genocide, a cardinal sin for Turkey, and there is even a monument in Paris commemorating the genocide.

When Macron announced the national day of remembrance he said that France «knows how to look history in the face”.

The phrase “Greece-France Alliance” (which rhymes in Greek and French) that was once a staple of political parlance in Greece has deep roots and substance.

Beyond fighting side by side in wars, the friendship between the late PM Constantine Karamanlis (who was exiled in Paris during the junta) and French president Valerie Giscard D’Estaing is widely considered critical in securing strong French support for Greece’s admission to the European Economic Community in January, 1981.

Karamanlis returned to Greece after the fall of the junta in July, 1974, on the French presidential aircraft.

The cordial rapport between Mitsotakis and Macron – two young, centre-right, and pro-business politicians – was apparent from the PM’s arrival at the Elysee Palace when the two all smiles exchanged kisses on both cheeks and then engaged in cordial repartee before their talks.

During the talks Macron reportedly shared intelligence with the PM on how Turkey is breaking the military blockade of Libya by sending Syrian mercenaries.