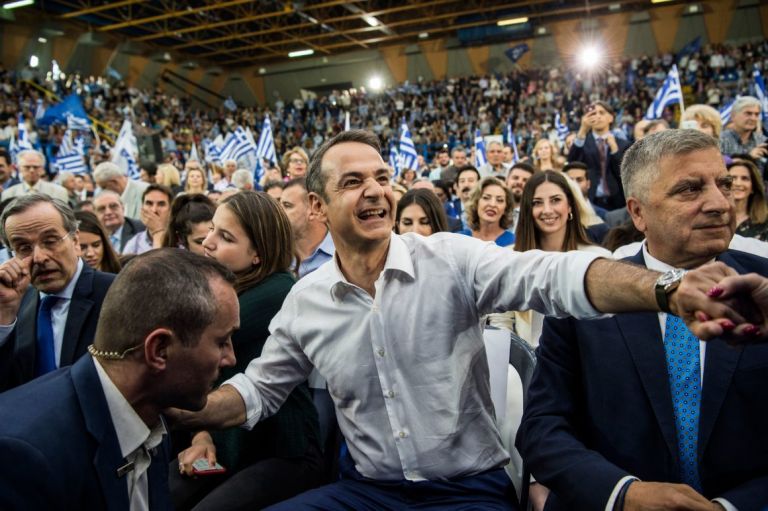 New Democracy party leader Kyriakos Mitsotakis (C) greets supporters during a pre-election campaign two days ahead of the elections for the European Parliament in Athens on May 22, 2019. (Photo by ANGELOS TZORTZINIS / AFP) (Photo credit should read ANGELOS TZORTZINIS/AFP/Getty Images)
Share

The ruling party and the prime minister personally during the electoral campaign and once in office fervently declared their faith in the rule of law and the enforcement of laws.

The government found many cases in which the law was ignored and the rule of law was not respected. It also proclaimed that it cannot be blackmailed and that nobody is above the law.

The government’s word of honour and faith in the rule of law did not endure the test of time.

Early on it caved in to the blackmail and demands of particular individuals who demonstrably violated the law which prohibits the ownership of multiple football teams because that circumvents the terms and rules that ensure a healthy and truly competitive championship.

Right after the issuance of a well-documented report of the Committee on Professional Athletics (EEA) which demonstrated the crime of multiple ownership in the case of PAOK F.C. and Xanthi F.C. the competent administrators of the two teams flouted the norm and could not deny or dispute the truth of the charges and of the buyout which they had set up through middlemen.

They went as far as to maintain that the matter will have an impact on national unity and cohesion.

They invoked Turkish threats and threatened that the country would be destabilised if the government approved the EEA report and imposed the appropriate penalty of a downgrade of the two teams to the second category.

Needless to say, ruling party MPs were personally pressurised and the political leadership was confronted with verbal attacks and curses from circles which in previous years acted on the margins of legality.

They enjoyed favourable arrangements for the repayment of debts, the cancellation of fines, and acquittals as regards a host of charges concerning money launderin, contraband cigarettes, and other dubious actions.

The government and the prime minister personally succumbed to the blackmail and hastened to announce that they would table a legislative amendment in Parliament which would do away with the penalty of downgrading a team and instead would subtract 5-10 points in the current or the next championship from those who have violated the law prohibiting the ownership of more than one team.

That is what occurred on the evening of 28 January after unseemly bargaining with those who violated the law and demanded full exoneration!

It is obvious that the government is sending the worst possible signals with its retreat and compromise.

Every interest group and union with even the least power will henceforth refuse to abide by the law and instead will blackmail and unleash virulent attacks whenever they think that even their illegal interests are affected.

In this manner democracy is undermined, the rule of law is violated, the law is abolished, and the terms of peaceful social coexistence are circumvented.

Governments are lost and the leadership is discredited in the eyes of the citizenry, retreats, is reduced and is left without forces and capabilities.

Those in power must realise that without bold moves one cannot achieve success and earn respect.

The disobeying of the law by a leadership that had proclaimed it would enforce it constitutes a deep break and proof of weakness untrustworthiness.