The Greek initiative has the support of the World Meteorological Organisation (WMO) and UNESCO and was among nine flagship proposals selected by UN Secretary General Antonio Guterres to be discussed at the upcoming climate summit. 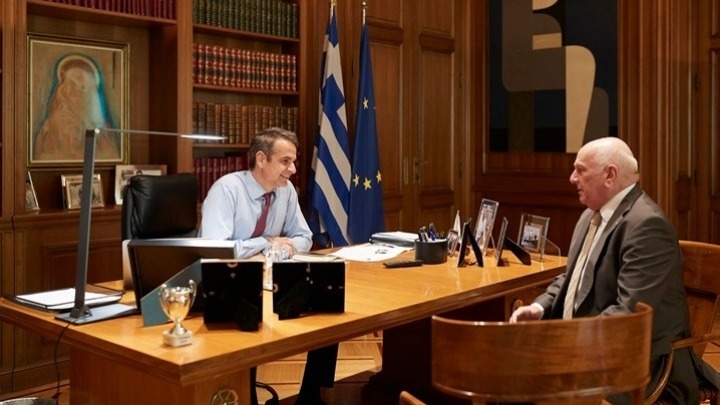 Prime Minister Kyriakos Mitsotakis met today with Professor of Atmospheric Physics and climatology Christos Zerefos to discuss, ahead of the UN Climate Change Summit,  aspects of the impact of the climate crisis on the environment and on Greece’s cultural heritage.

Zerefos heads the Research Center for  Atmospheric Physics & Climatology of the Academy of Athens which drafted a Greek proposal that will be presented at the UN Climate Change Summit on 23 September.

Zerefos briefed Mitsotakis ahead of the summit on details of the Greek proposals which are linked to cultural heritage.

Mitsotakis said that he fully supports the proposal that the Greek foreign ministry’s climate change directorate has submitted to the UN which calls for coordinated action to protect the world’s cultural and natural heritage from the impact of climate change.

The Greek initiative has the support of the World Meteorological Organisation (WMO) and UNESCO and was among nine flagship proposals selected by UN Secretary General Antonio Guterres to be discussed at the upcoming climate summit.

The Greek proposal aims to take measures and create mechanisms to protect cultural and natural heritage by increasing its resilience and ability to adapt, and by promoting research and education.

It was the only proposal that focused on protecting cultural heritage.

At the summit, the PM will present and explain the significance of the Greek initiative to  heads of state and government, while he already has garnered the support of a number of countries.

Zerefos will be the expert scientist sent by the Greek government.

The prime minister’s goal is for Greece to host a major event on the issue in Athens next May, inviting the UN Secretary General and other prominent personalities from around the world to attend, especially from countries that support the Greek proposal.

For the same reason, Greece is organising a special pre-summit event on 21 September as part of the 74th U.N. General Assembly, which will be held before Mitsotakis’ presentation.